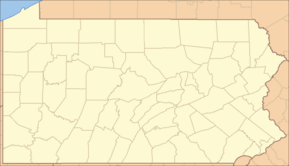 There are 121 state parks in the U.S. state of Pennsylvania, as of 2016. The Pennsylvania Bureau of State Parks, a division of the Pennsylvania Department of Conservation and Natural Resources (DCNR), is the governing body for all these parks, and directly operates 113 of them. The remaining eight are operated in cooperation with other public and private organizations.

The list gives an overview of Pennsylvania state parks and a brief history of their development since the first park opened in 1893. State parks range in size from 3 acres (1.2 ha) to 21,122 acres (8,548 ha), with nearly one percent (0.96%) of Pennsylvania's land as state park land. According to Dan Cupper (1993), "Pennsylvania is the thirty-third largest state, but only Alaska and California have more park land".

There are state parks in 61 of Pennsylvania's 67 counties, which nearly reaches Pennsylvania's goal of having a state park within 25 miles (40 km) of every resident in the Commonwealth. Eleven of the 121 parks do not have "State Park" in their name. Three are "Conservation Areas": Boyd Big Tree Preserve, Joseph E. Ibberson, and Varden; four are "Environmental Education Centers": Jacobsburg, Jennings, Kings Gap (also a "Training Center") and Nolde Forest; White Clay Creek is a "Preserve"; Norristown is a "Farm Park"; and Big Spring is a "State Forest Picnic Area".

Pennsylvania's first state park was Valley Forge State Park, purchased by the Commonwealth on May 30, 1893 to preserve Valley Forge. It was transferred to the National Park Service (NPS) on the Bicentennial of the United States, July 4, 1976. Many state parks still preserve history: as of 2012, forty-two Pennsylvania state park sites are on the National Register of Historic Places, including two National Historic Landmarks (Delaware Canal and Point), twenty-eight Civilian Conservation Corps sites in nineteen parks, and twelve other parks' historic sites and districts. Eight of the former state parks were also chiefly historic.

In addition to preserving historic sites, Pennsylvania also sought to preserve natural beauty and offer opportunities for recreation in its state parks. In 1902 Mont Alto State Forest Park was the second park established, a year after the state "Bureau of Forestry" was set up to purchase, preserve, and restore Pennsylvania's forests, which had been ravaged by lumbering, charcoal production, and wild fires. Parks were added sporadically until the 1930s, some mere camping and picnic areas in state forests, while others preserved unique sites. The 1930s saw a great expansion of parks and their facilities under Governor Gifford Pinchot, who cooperated with President Franklin Roosevelt, despite their being of different political parties. The Civilian Conservation Corps (CCC) established 113 CCC camps in Pennsylvania (second only to California). Using CCC and Works Progress Administration (WPA) labor, the NPS built five Recreation Demonstration Areas, which became Pennsylvania state parks in 1945 and 1946: Blue Knob, French Creek, Hickory Run, Laurel Hill, and Raccoon Creek. The CCC also "fought forest fires, planted trees, built roads, buildings, picnic areas, swimming areas, campgrounds and created many state parks".

In 1956, there were forty-four state parks in Pennsylvania, mostly in rural areas. Forty-five parks had been added by 1979, mostly near urban areas, and the system had increased by 130,000 acres (53,000 ha). This was thanks largely to the efforts of Maurice K. Goddard, who served as director of the precursors to the DCNR for twenty-four years under six administrations. The number of visitors to parks more than tripled in this time and two voter approved bond issues (Projects 70 and 500) raised millions of dollars for park expansions and improvements. All this expansion was not without costs and by 1988 there was an estimated $90 million in deferred maintenance. In 1993, as the park system celebrated its one-hundredth anniversary, new tax and bond revenues were earmarked for the parks. Since 2000, parks are being improved through the state's Growing Greener and Growing Greener II and bond programs.

Other names of current parks

The following are significantly different former or alternate names for nine current Pennsylvania state parks. Note that many parks were originally "State Forest Parks" or were state public camping or picnic areas in Pennsylvania state forests. In modern times, some "State Parks" have become "Environmental Education Centers", while other parks have dropped one word from their name ("Cherry Springs Drive" is now Cherry Springs, "Codorus Creek" is now Codorus, "Kooser Lake" is now Kooser, "Laurel Hill Summit" is now Laurel Summit, and "Promised Land Lake" is now Promised Land). Such minor name changes are not included in this table.

Other names of former parks

The following are significantly different former or alternate names for two former Pennsylvania state parks. One former park dropped one word from its name ("Colerain Forge" became "Colerain" sometime between 1924 and 1937). Such minor name changes are not included in this table.

All content from Kiddle encyclopedia articles (including the article images and facts) can be freely used under Attribution-ShareAlike license, unless stated otherwise. Cite this article:
List of Pennsylvania state parks Facts for Kids. Kiddle Encyclopedia.