Ridley Creek State Park is a 2,606-acre (1,055 ha) Pennsylvania state park in Edgmont, Middletown, and Upper Providence Townships, Delaware County, Pennsylvania in the United States. The park, about 5 miles (8 km) north of the county seat of Media, offers many recreational activities, such as hiking, biking, fishing, and picnicking. Ridley Creek passes through the park. Highlights include a 5-mile (8 km) paved multi-use trail, a formal garden designed by the Olmsted Brothers, and Colonial Pennsylvania Plantation, which recreates daily life on a pre-Revolutionary farm. The park is adjacent to the John J. Tyler Arboretum. Ridley Creek State Park is just over 16 miles (26 km) from downtown, Philadelphia between Pennsylvania Route 352 and Pennsylvania Route 252 on Gradyville Road.

The bulk of the property was acquired in the late 1960s from the estate of well known horse breeder Walter M. Jeffords, Sr. and his wife Sarah, a niece of Samuel D. Riddle. The Jeffords had acquired the land starting about 1912 in small parcels, until they had over 2,000 acres (8.1 km2), which was the largest private undeveloped property in the Philadelphia area by the 1960s. By 1918 they had built a large mansion, now the park office, around a stone colonial farmhouse. Twenty-four other historic properties were located on the grounds, many farmsteads that had retained family ownership since the seventeenth century. In 1976 these properties were registered on the National Register of Historic Places as a national historic district.

The area was originally settled by English Quakers and remained agrarian into the twentieth century. The oldest property is the 1683 Worrel House. In 1718 a water mill, then known as Providence Mill, began to grind corn. In the late 18th century a plaster mill was established next to the grist mill. A rolling and slitting mill replaced the plaster mill by 1812, and became known as Bishop's Mills. Workers cottages, a dam, and several outbuildings complete the mill complex, now known as Sycamore Mills. The mills operated until 1901, when they were damaged by fire. 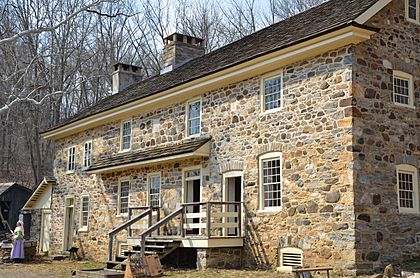 Colonial Pennsylvania Plantation in the park

The Colonial Pennsylvania Plantation is a living museum on the 112-acre (0.45 km2) farm where the Pratt family lived from 1720 to 1820. Admission is charged and it is open to the general public on weekends from April through November. 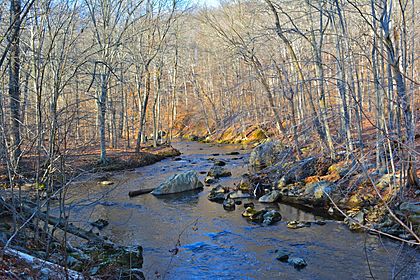 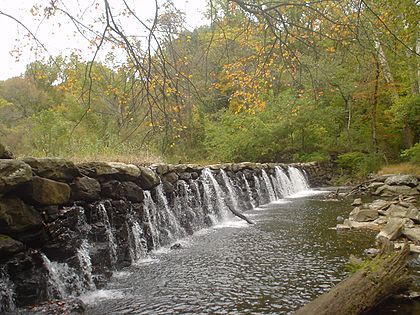 The location of Ridley Creek State Park, just 16 miles (26 km) from downtown Philadelphia, has led to its popularity. Ridley Creek is very popular with fishermen. It is stocked with trout by the Pennsylvania Fish and Boat Commission. A portion of the creek is a designated catch and release area for fly fishing only. There is a wheelchair accessible fishing platform on a multi-use trail. The 12 miles (19 km) of hiking trails at Ridley Creek State Park are popular with dog owners. These trails pass through a variety of habitats. A 5-mile (8 km) multi use trail is open to jogging, bicycling and walking. The park also features a 4.7-mile (7.6 km) equestrian trail.

The following state parks are within 30 miles (48 km) of Ridley Creek State Park: 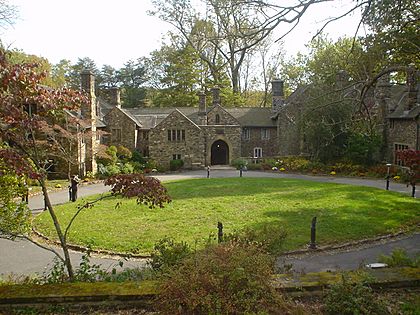 All content from Kiddle encyclopedia articles (including the article images and facts) can be freely used under Attribution-ShareAlike license, unless stated otherwise. Cite this article:
Ridley Creek State Park Facts for Kids. Kiddle Encyclopedia.