Media is a borough in and the county seat of Delaware County, Pennsylvania, United States, about 13 miles (21 km) west of Philadelphia. Media was incorporated in 1850 at the same time that it was named the county seat. The population was 5,327 at the 2010 census, down from 5,533 at the 2000 census.

In June 2006, it became the first fair trade town in America.

The history of the area goes back to William Penn, but the area remained predominantly rural until the twentieth century. Land in the area was sold and settled soon after William Penn was named proprietor of the colony of Pennsylvania in 1681 by King Charles II of England. Peter and William Taylor bought the land where Media is now located, directly from Penn. At the time, the land was located in Chester County. Providence Township was organized in 1684, and later divided into Upper Providence and Nether Providence townships by 1690, even though they only had 40 taxable properties at the time. The current borough, formed in 1850, sits between the two townships.

In 1683, the Court of Chester County approved the construction of "Providence Great Road" (now Pennsylvania Route 252). The road, which runs north from Chester to within a few blocks of today's downtown, is shown on a 1687 map along with the names of local landowners. It forms the eastern border of the borough.

Thomas Minshall, a Quaker, was an early Media resident, settling just outside the small village then known as "Providence", along the Providence Great Road. The village then included a tailor shop, blacksmith shop, wheelwright shop, barn and other buildings.

Minshall bought 625 acres (253 ha) from William Penn and arrived in 1682. The Providence Friends Meeting was established at his house in February 1688, and a meetinghouse was later built on land he donated for the purpose. The original meetinghouse was built out of logs in 1699 or 1700, and the current building dates to 1814. A house on Minshall's property, built c. 1750, still stands and was given to the citizens of the borough in 1975.

Chester County, Pennsylvania was divided in 1789, the eastern portion becoming Delaware County, Pennsylvania. The area in the center of the new county remained rural through 1850. On March 11, 1850, the Commonwealth of Pennsylvania by Special Act of Assembly incorporated the Borough of Media, and made the sale of malt and spirituous liquors unlawful within its borders. At the same time, the county seat of Delaware County was moved to Media from Chester. The borough was formed from four farms purchased by the county, totaling only 480 acres (190 ha). The borders of the borough have not changed since that time. 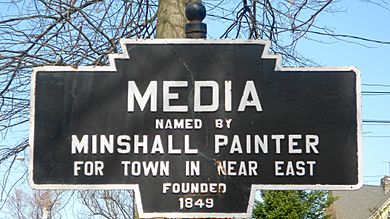 Streets were plotted in a rectangular grid around the location of the new courthouse, lots were sold at public auctions, and the construction of houses began. Sources agree that Minshall Painter, a descendant of Thomas Minshall, suggested the name "Media", but do not agree on the reason. The name most likely comes from the borough's central location in Delaware County.

The John J. Tyler Arboretum occupies part of Thomas Minshall's original 625 acres (253 ha). This farm was used by the Underground Railroad. The land was donated to a public trust in 1944 by an eighth-generation descendant. The arboretum was started as a private collection by brothers Jacob and Minshall Painter. In 1825, they began systematically planting over 1,000 varieties of trees and shrubs. Over 20 of their original trees survive, including a giant sequoia. 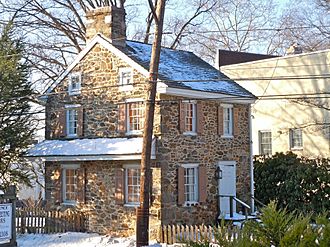 Minshall Painter was also a leader of the Delaware County Institute of Science, which was formed on September 21, 1833, with just four other members: George Miller, John Miller, George Smith, M.D., and John Cassin. The institute was incorporated in 1836. About 1850, Painter gave the institute the land where its building currently stands at 11 Veterans Square, and the building was constructed in 1867.

In the second half of the 19th century, Media was a summer resort for well-to-do Philadelphians. The borough's large vacation hotels included the Idlewild Hotel (1871) on Lincoln Street at Gayley Terrace, Chestnut Grove House or "The Colonial" (1860) on Orange Street, and Brooke Hall on Lemon Street and Washington Avenue (now Baltimore Avenue). The Chestnut Grove was used for a year by nearby Swarthmore College due to a fire on its campus.

The West Chester and Philadelphia Railroad was built through Media on October 19, 1854. Electrified service was opened on December 2, 1928. Up to 50 trains passed through each day. The railroad became part of the Philadelphia, Wilmington and Baltimore Railroad and eventually the Penn Central. SEPTA took over operations in 1983. Woodrow Wilson spoke at the Media Station in 1912 during his first election campaign. Trolley transportation lines spread to and through Media in the 1890s and early 1900s. 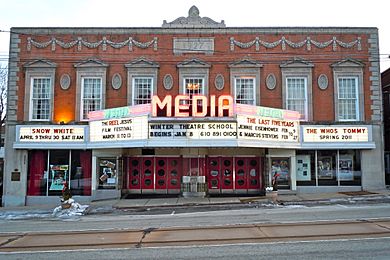 The Media Theatre for the Performing Arts

The Media Theatre opened as a vaudeville house in 1927. The first 'talkie' film, The Jazz Singer, was shown there. It remained a popular cinema through the 1970s and 1980s. In 1994, the theater underwent a $1 million restoration by Walter Strine Sr. and re-opened as the 'Media Theatre for the Performing Arts'. Shows produced there have included The Full Monty, Carousel and Miss Saigon.

On March 8, 1971, the Citizens' Commission to Investigate the FBI raided an FBI "resident agency" in Media. They later released thousands of documents to major newspapers around the country. These documents revealed FBI tactics, like the recruitment of Boy Scouts as informants, and confirmed for the first time the existence of COINTELPRO, an FBI program to "expose, disrupt, misdirect, discredit, or otherwise neutralize" dissident groups in the United States.

In June 2006, Media became the first town in the United States to follow over 300 towns in Europe in attaining fair trade certification. To meet the criteria for certification, Media passed a council resolution in support of fair trade, served fair-trade coffee and tea in local government meetings and offices, ensured that a range of fair-trade products were available in local restaurants and businesses, raised popular support and provided media coverage for the fair-trade campaign, and convened a fair-trade steering committee to ensure continued commitment.

Three locally recognized historic districts were designated by the borough in 1975. These districts are 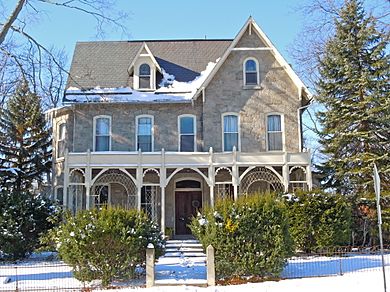 There are several parks located within the borough of Media and shared with surrounding communities. 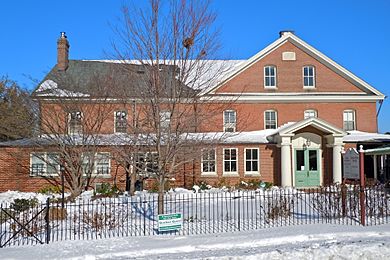 According to the United States Postal Service, the following addresses are included in the 19063 ZIP code: Elwyn, Garden City, Glen Riddle, and Rose Valley. Other areas at least partially included in the 19063 zip code are: Upper Providence Township; Nether Providence Township, the neighborhoods of South Media, Bowling Green, Pine Ridge and Ridgewood; and most of Middletown Township, including, Bortondale, Riddlewood, and Lima.

Media is connected to Upper Darby Township by the 101 trolley. The trolley terminates just after the Delaware County Courthouse, at a station known as Orange Street. Media also has a stop on the Media/Elwyn Regional Rail Line at the corner of Orange Street and Station Road.

U.S. 1 formerly ran through the borough until the "Media bypass" was completed in 1960. The bypass has an unusual "volleyball" or three-level diamond interchange with Interstate 476. The former Route 1 through the center of Media is known by its older name, Baltimore Avenue, changing to "Baltimore Pike" outside the borough limits.

The Media-Upper Providence Friends School, located within the borough, is the only private school in the borough.

Mother of Providence Regional Catholic School in Wallingford is the area Catholic school of the Roman Catholic Archdiocese of Philadelphia. It formed in 2012 from a merger of Nativity BVM School, which was Media's only pariochal school and St. John Chrysostom in Wallingford. Nativity BVM school opened in 1912, with its last building occupied in 1949. The Nativity BVM school administration chose not to file an appeal against the 2012 order to merge. Some parents had lobbied for the continued operation of the school. The archdiocese had originally planned to make Nativity BVM the regional campus, but changed when St. John Chrystosom had appealed against that decision. After the closure, Media Elementary School occupied the campus while renovations of the permanent Media Elementary occurred.

Media is also served by the Media-Upper Providence Free Library.

All content from Kiddle encyclopedia articles (including the article images and facts) can be freely used under Attribution-ShareAlike license, unless stated otherwise. Cite this article:
Media, Pennsylvania Facts for Kids. Kiddle Encyclopedia.