Kids Encyclopedia Facts
Not to be confused with Chester, Delaware County, Pennsylvania.

Chester County (Chesco) is a county in the U.S. state of Pennsylvania. As of the 2010 census, the population was 498,886. The county seat is West Chester. Chester County was one of the three original Pennsylvania counties created by William Penn in 1682. It was named for Chester, England.

Chester County is the highest-income county in Pennsylvania and 24th highest in the nation as measured by median household income (as of 2010). 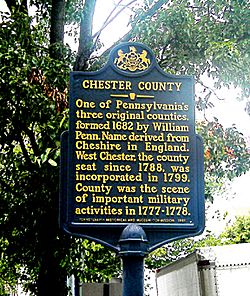 Philadelphia, Bucks, and Chester were the three Pennsylvania counties initially created by William Penn on August 24, 1682. At that time, Chester County's borders were Philadelphia County to the north, the ill-defined western edge of the colony (approximately the Susquehanna River) to the west, the Delaware River to the east, and Delaware and Maryland to the south. Chester County replaced the Pennsylvania portion of New Netherland/New York’s "Upland", which was officially eliminated when Pennsylvania was chartered on March 4, 1681, but did not cease to exist until June of that year. Much of the Welsh Tract was in eastern Chester County, and Welsh place names, given by early settlers, continue to predominate there.

Much of the history of Chester County arises from its location between Philadelphia and the Susquehanna River. The first road to "the West" (meaning Lancaster County) passed through the central part of Chester County, following the Great Valley westward; with some re-alignments, it became the Lincoln Highway and later U.S. Route 30. This road is still named Lancaster Avenue in most of the Chester county towns it runs through. The first railroad (which became the Pennsylvania Railroad) followed much the same route, and the Reading Railroad progressed up the Schuylkill River to Reading. Industry tended to concentrate along the rail lines. Easy transportation allowed workers to commute to urban jobs, and the rise of the suburbs followed. To this day, the developed areas form "fingers" extending along major lines of transportation.

During the American Revolutionary War, the Battle of Brandywine was fought at what is now the southeastern fringe of the county. The Valley Forge encampment was at the northeastern edge.

Watersheds that serve Chester County include the Octoraro, the Brandywine, and Chester creeks, and the Schuylkill River. Many of the soils are fertile, rich loam as much as twenty-four inches thick; together with the temperate climate, this was long a major agricultural area. Mushroom growing is a specialty in the southern portion of the county.

The region was originally occupied by the Lenni Lenape people, who greeted European settlers in the seventeenth century with amity and kindness. British settlers were mostly English, Scotch-Irish and Welsh in ethnicity. From the late 19th to early 20th century, the industrial areas of the region, such as Coatesville, attracted immigrants and job seekers from Germany and Ireland, Eastern Europe, Italy, and the American rural South, with both black and white migrants coming north. Later Hispanic immigrants have included Puerto Ricans and, most recently, Mexicans.

Long a primarily rural area, Chester County is now the fastest-growing county in the Delaware Valley; it is one of the fastest growing in the entire Northeastern section of the United States. 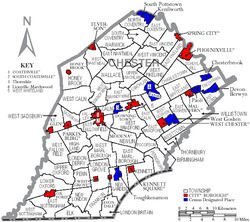 Under Pennsylvania law, there are four types of incorporated municipalities: cities, boroughs, townships, and, in at most two cases, towns. The post office uses community names and boundaries that usually do not correspond to the townships, and usually only have the same names as the municipalities for the cities and boroughs. The names used by the post office are generally used by residents to describe where they live. The following cities, boroughs and townships are located in Chester County:

The population ranking of the following table is based on the 2010 census of Chester County.

All content from Kiddle encyclopedia articles (including the article images and facts) can be freely used under Attribution-ShareAlike license, unless stated otherwise. Cite this article:
Chester County, Pennsylvania Facts for Kids. Kiddle Encyclopedia.