Teller made his feature film debut in 2010 and gained recognition for his starring role in the 2013 coming-of-age film The Spectacular Now and the Divergent film trilogy (2014–2016), both opposite Shailene Woodley. His role in the 2014 Academy Award-winning drama Whiplash served as his breakthrough and earned him wide acclaim. Following Whiplash, he became a leading man, starring in multiple romantic comedies, the superhero film Fantastic Four (2015), and the 2016 biographical films War Dogs and Bleed for This, among others.

In 2022, Teller starred in the action film Top Gun: Maverick. The film was directed by Joseph Kosinski, whom Teller had previously collaborated with on the film Only the Brave (2017). The pair teamed up again for the Netflix film Spiderhead (2022). On television, he has starred in the Amazon crime drama Too Old to Die Young (2019) and the Paramount+ miniseries The Offer (2022) about The Godfather.

Teller was born in Pennsylvania to parents Merry, a real estate agent, and Michael, a nuclear power plant engineer. He has two older sisters, Erin and Dana. His paternal grandfather was of Russian Jewish descent, and his ancestry also includes English and Irish forebears.

Teller spent his early years in Pennsylvania and Delaware before his family moved to Citrus County, Florida, at age twelve. Growing up, he was involved with acting, was president of his high school's drama club, and played alto saxophone, drums, piano, and guitar. He also played baseball competitively and had dreams of turning professional. He graduated from Lecanto High School in Lecanto, Florida.

Subsequently, he attended the New York University Tisch School of the Arts; there, he studied method acting at the Lee Strasberg Theatre and Film Institute and screen acting with Stonestreet Studios. He earned a BFA in drama in 2009.

In 2007, Teller was a passenger in a car that lost control at 80 mph (130 km/h) and flipped eight times. He has multiple scars on his face from the crash. 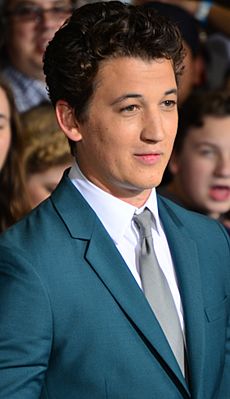 Teller at the film premiere of Divergent in March 2014

Teller appeared in many short films between 2004 and 2010. After graduating from Tisch School of the Arts in 2009, he made his major film debut in Rabbit Hole (2010), after Nicole Kidman handpicked him for the role. Teller starred in the stage musical Footloose in high school, and later starred in the 2011 remake film of the same name. In 2013, he starred in 21 & Over and The Spectacular Now, opposite Shailene Woodley.

Teller received further recognition for playing Peter Hayes in Divergent (2014), and the film's sequels, Insurgent (2015) and Allegiant (2016). He has also played Mister Fantastic in the reboot film Fantastic Four (2015) and arms dealer David Packouz in War Dogs (2016). He trained for 5 months to get in shape for the role of biopic boxer Vinny Paz in film Bleed for This (2016).

In 2017, he starred in two biopic films, Only the Brave and Thank You for Your Service. In November 2020, it was announced that Teller will star in a political satire called The Fence. In September 2021, it was reported that filming on The Offer, the Paramount+ miniseries about the production of the film The Godfather in which Teller plays producer Albert S. Ruddy, was temporarily halted due to COVID concerns. The miniseries ran from April to June 2022. In November 2021, he appeared in Taylor Swift's music video "I Bet You Think About Me" directed by Blake Lively.

In 2022, he starred in Top Gun: Maverick. He was initially hesitant to accept the role, as he was wary of the potential success and attention he would receive from starring in a major film alongside Tom Cruise. He was convinced to accept it by Cruise himself, who persuaded him that he was perfect for the role. In May 2022, Miles Teller stated that he had been pitching a follow-up film centered around his character to the studio. The actor referred to his pitch as Top Gun: Rooster. By July of the same year, he stated that he has been having ongoing discussions regarding a sequel with Tom Cruise. In regard to the popularity and support, Teller said that the experience has "been awesome" and that "I've never really experienced something like this in my life."

Teller made his hosting debut on the opener of the 48th season of Saturday Night Live. 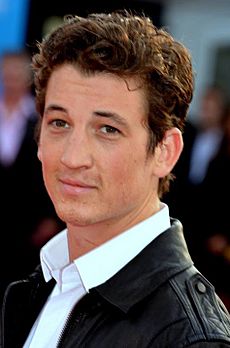 Since 2013, he has been in a relationship with model Keleigh Sperry. They were engaged at the Molori Safari Lodge in the Madikwe Game Reserve, South Africa, on August 20, 2017, and were married on September 1, 2019, in Maui, Hawaii.

Teller is a fan of the Philadelphia Phillies.

All content from Kiddle encyclopedia articles (including the article images and facts) can be freely used under Attribution-ShareAlike license, unless stated otherwise. Cite this article:
Miles Teller Facts for Kids. Kiddle Encyclopedia.