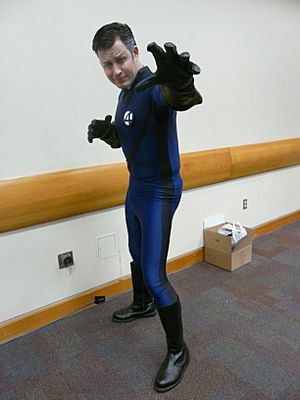 A cosplayer dressed up as Mr. Fantastic.

Reed Richards (also known as Mister Fantastic) is a fictional character, a Marvel Comics superhero created by writer Stan Lee and artist/co-writer Jack Kirby. The character first appeared in Fantastic Four #1 in November 1961. Like the other founding members of the Fantastic Four, Reed received his powers after being exposed to a cosmic storm. His primary power is to stretch his body to lengths. He is also the Invisible Woman's husband. He has been adapted into motion pictures and is played by Ioan Gruffudd and Miles Teller.

Reed has been portrayed by Ioan Gruffudd in the Tim Story movies and the 2005 video game.

All content from Kiddle encyclopedia articles (including the article images and facts) can be freely used under Attribution-ShareAlike license, unless stated otherwise. Cite this article:
Mister Fantastic Facts for Kids. Kiddle Encyclopedia.