With his work alongside co-writer/artists Jack Kirby and Steve Ditko, he co-created many popular fictional characters, including superheroes Spider-Man, the X-Men, Iron Man, Thor, the Hulk, the Fantastic Four, Black Panther, Daredevil, Doctor Strange, and Ant-Man.

Following his retirement from Marvel in the 1990s, he remained a public figurehead for the company, and made cameo appearances in movies based on Marvel characters. Meanwhile, he continued independent creative works into his 1990s, until his death in 2018.

Lee was born on December 28, 1922, in Manhattan, New York City, in the apartment of his Romanian-born Jewish immigrant parents. His parents were Celia (née Solomon) and Jack Lieber, at the corner of West 98th Street and West End Avenue. His father, trained as a dress cutter, worked only sporadically after the Great Depression, His family moved further uptown in Manhattan, in Washington Heights, Manhattan. Lee had one younger brother named Larry Lieber.

At an early age, Lee was inspired by books and movies, especially those with Errol Flynn playing heroic roles. By the time Lee was in his teens, the family was living in an apartment in The Bronx. Lee described it as "a third-floor apartment facing out back". Lee and his brother shared the bedroom, while their parents slept on a foldout couch.

Lee attended DeWitt Clinton High School in the Bronx. He enjoyed writing, and had dreams of one day writing the "Great American Novel". He said that in his youth he worked such part-time jobs as writing obituaries for newspapers for the National Tuberculosis Center. He delivered sandwiches for the Jack May pharmacy to offices in Rockefeller Center, worked at the Rivoli Theater on Broadway, and sold subscriptions to the New York Herald Tribune newspaper. He graduated from high school early in 1939 and joined the WPA Federal Theatre Project.

With the help of his uncle Robbie Solomon, Lee became an assistant in 1939 at the new Timely Comics division of pulp magazine and comic-book publisher Martin Goodman's company. By the 1960s, they would evolve into Marvel Comics.

His first role in the comics were, as Lee described in 2009: "In those days [the artists] dipped the pen in ink, [so] I had to make sure the inkwells were filled...I went down and got them their lunch, I did proofreading, I erased the pencils from the finished pages for them". Lee made his comic-book debut with the text filler "Captain America Foils the Traitor's Revenge" in Captain America Comics #3 (May 1941). This is where he first used the pseudonym Stan Lee, which years later he would become his legal name. Lee later explained that he was so embarrassed that he used a pen name so that nobody would associate his real name with comics when he some day wrote the Great American Novel. 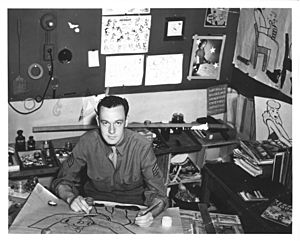 Lee's first superhero co-creation was the Destroyer, in Mystic Comics #6 (August 1941). Other characters he co-created during this period, which was called the Golden Age of Comic Books, include Jack Frost and Father Time.

In 1941, Lee, just under 19 years old, became interim editor. He soon became the comic-book division's editor-in-chief, as well as art director for much of that time, until 1972, when he became publisher.

Lee entered the United States Army in early 1942. He was a member of the Signal Corps, repairing telegraph poles and other communications equipment. He was later transferred to the Training Film Division, where he worked writing manuals, training movies, slogans, and cartooning. The army called Lee a "playwright", making him one of the nine men in the U.S. Army were given that title. Lee returned from his World War II military service in 1945.

In the mid-1950s, the company was known as Atlas Comics, Lee wrote stories of many genres including romance, Westerns, humourscience fiction, medieval adventure, horror and suspense. By the end of the decade, Lee was not happy with his career and thought about quitting the field.

In the late 1950s, DC Comics created the Justice League making comic book superheros more popular. In response, publisher Lee was hired to come up with a new superhero team. Lee's wife, Joan, said that he experiment with stories he liked, since he was planning on changing careers and had nothing to lose.

Lee followed his wife's advice and created a set of heroes with character flaws because many heroes before were seen as nearly perfect beings. 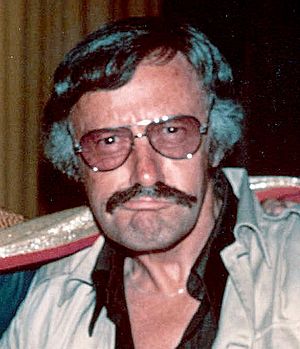 The first superheroes Lee and artist Jack Kirby created together were the Fantastic Four. They became popular which led Lee and Marvel's illustrators to create new heroes. Again working with Kirby, Lee co-created the Hulk, Thor, Iron Man, and the X-Men; with Bill Everett, Daredevil; and with Steve Ditko, Doctor Strange and Marvel's most successful character, Spider-Man. As a result, Lee created a shared universe between the fictional heroes. Lee and Kirby combined several of their newly created characters together into the team title The Avengers.

Lee's revolution extended beyond the characters and storylines to the way in which comic books engaged the readership and built a sense of community between fans and creators. He introduced the practice of regularly including a credit panel on the splash page of each story, naming not just the writer and penciller but also the inker and letterer. Regular news about Marvel staff members and upcoming storylines was presented on the Bullpen Bulletins page, which (like the letter columns that appeared in each title) was written in a friendly, chatty style. Lee remarked that his goal was for fans to think of the comics creators as friends, and considered it a mark of his success on this front that, at a time when letters to other comics publishers were typically addressed "Dear Editor", letters to Marvel addressed the creators by first name (e.g. "Dear Stan and Jack").

In the 1960s, Lee wrote, drew and edited most of Marvel's series and wrote a monthly column called "Stan's Soapbox". He wrote endless promotional copy, often signing off with his trademark motto, "Excelsior!". Lee would brainstorm a story with the artist and then prepare a short synopsis rather than a full script. Based on the synopsis, the artist would fill the number of pages left by determining and drawing the panel-to-panel storytelling.

After Ditko's left Marvel in 1966, John Romita Sr. became Lee's collaborator on The Amazing Spider-Man. Within a year, it overtook Fantastic Four to become the company's top seller. Lee and Romita's stories focused as much on the social and college lives of the characters as they did on Spider-Man's adventures. The stories talked about issues at the time such as the Vietnam War, political elections, and student activism. Lee created the Black Panther, an African king who would be mainstream comics' first black superhero. 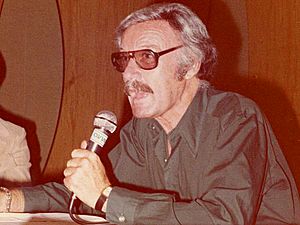 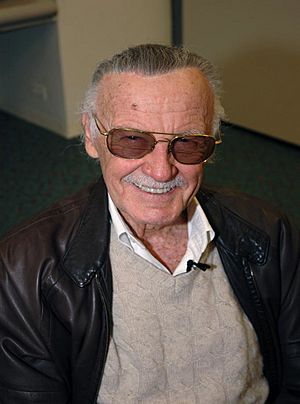 Lee became a public face for Marvel Comics. He made appearances at comic book conventions around America, teaching at colleges and participating in panel discussions. Lee created the Spider-Man newspaper comic strip on January 3, 1977. Lee's final work with Jack Kirby, The Silver Surfer: The Ultimate Cosmic Experience, was published in 1978. Lee and John Buscema produced the first issue of The Savage She-Hulk (February 1980).

Lee moved to California in 1981 to work on Marvel's television and movie properties. Lee was briefly president of the entire company, but soon stepped down to become publisher instead. Lee said that being president of the company was too much about numbers and finance and not enough about the creative process he enjoyed.

Lee stepped away from regular duties at Marvel in the 1990s. He continued to receive an annual salary of $1 million as Chairman Emeritus. In 1998 he and Peter Paul began a new Internet-based superhero creation, production, and marketing studio, Stan Lee Media. After legal issues, Stan Lee Media filed for bankruptcy in February 2001. 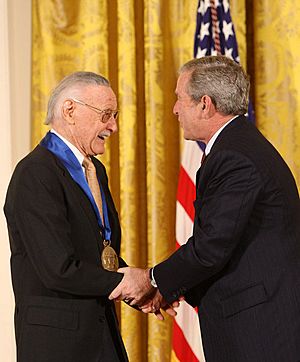 Lee being awarded by President George W. Bush the National Medal of Arts, 2008

Following the success of Fox Studio's 2000 X-Men movie and Sony's then-current Spider-Man movie, Lee sued Marvel in 2002. He sued company because he believed they failed to pay him the 10% he was due under the terms of his contract for movies featuring the characters he had co-created. They settled in 2005 for an unknown amount of money.

In September 2012, Lee had surgery to add a pacemaker.

Lee died at the age of 95 at Cedars-Sinai Medical Center in Los Angeles, California, on November 12, 2018. The cause was respiratory and congestive heart failure. Earlier that year, Lee publicly said that he had pneumonia in February and was rushed to the hospital for worsening conditions at around the same time.

All content from Kiddle encyclopedia articles (including the article images and facts) can be freely used under Attribution-ShareAlike license, unless stated otherwise. Cite this article:
Stan Lee Facts for Kids. Kiddle Encyclopedia.