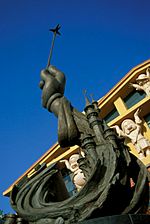 A 14-foot monumental bronze sculpture of the Disney Legends Award

Disney Legends Awards are given to individuals whose work has made significant contributions to The Walt Disney Company. The award was created in 1987. It was designed to honor those employees whose accomplishments have helped create Disney magic. More than 200 people have received the Disney Legends award. A selection committee chooses who will receive the award. It is given out at a special ceremony.

All content from Kiddle encyclopedia articles (including the article images and facts) can be freely used under Attribution-ShareAlike license, unless stated otherwise. Cite this article:
Disney Legends Facts for Kids. Kiddle Encyclopedia.