Clarence Charles "Ducky" Nash (December 7, 1904 – February 20, 1985) was an American voice actor. He is best known for the Disney cartoon character Donald Duck, whose distinctive voice he provided for 50 years, also known as the voice of Daisy Duck in 1940. He was born in the rural community of Watonga, Oklahoma, and a street in that town is named in his honor. In 1993, he was made a Disney Legend for his contributions to Walt Disney films.

Nash went through several of his voices, and Walt Disney happened by when Nash gave his impersonation of a family of ducks. Disney declared Nash perfect for the role of a talking duck in their upcoming animated short, The Wise Little Hen. The duck, of course, was Donald Duck, who Nash went on to voice for almost 50 years, in over 120 shorts and films. The last film to feature Nash's famous voice was 1983's Mickey's Christmas Carol, although he continued to provide Donald's voice for commercials, promos and other miscellaneous material until his death.

Nash's Donald Duck voice was achieved by what is called buccal speech: an alaryngeal form of vocalization which uses the inner cheek to produce sound rather than the larynx. He first discovered it while trying to mimic his pet goat Mary. In his days before Disney, Nash performed in vaudeville shows where he often spoke in a "nervous baby goat" voice. 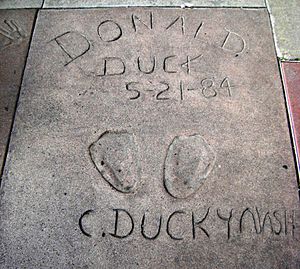 Nash left Donald's "footprints" at the Chinese Theater in Hollywood.

Donald Duck went on to become one of the most famous cartoon characters in the world, a great part of this due to Nash's voice. The voice is distinctive both for its duck-like quality and the fact that it is often very difficult for anybody to understand, especially when Donald flew into a rage (which happened fairly often). To keep Donald's voice consistent throughout the world, Nash voiced the character in all foreign languages the Disney shorts were translated to (with the aid of the phonetic alphabet), meaning Donald retained his same level of in-coherency all across the globe.

In addition to Donald's voice, Nash also voiced Daisy Duck (in her earliest appearances, when she was little more than a female version of Donald), as well as Donald's nephews Huey, Dewey and Louie. He provided the voice for PJ in the cartoon Bellboy Donald and for a bullfrog in Bambi. Nash also provided the meows of Figaro the kitten in a handful of shorts and did some dog sounds in One Hundred and One Dalmatians. He also voiced Jiminy Cricket for a brief period of time after Cliff Edwards's death in 1971. Nash also provided the meows and screeches for Tom in Tom and Jerry. His last performance in Tom and Jerry came in Mouse in Manhattan (1945), where he was the voice of vicious alley cats. 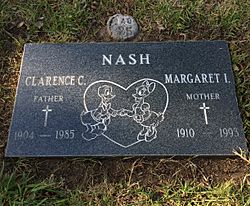 Nash died on February 20, 1985 of leukemia in the Providence Saint Joseph Medical Center in Burbank, California at the age of 80 and was interred in the San Fernando Mission Cemetery in Mission Hills, Los Angeles, California. The tombstone of the grave he now shares with his wife Margaret Nash (who died in 1993) depicts a carving of Donald and Daisy Duck holding hands.

All content from Kiddle encyclopedia articles (including the article images and facts) can be freely used under Attribution-ShareAlike license, unless stated otherwise. Cite this article:
Clarence Nash Facts for Kids. Kiddle Encyclopedia.