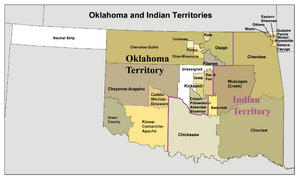 Oklahoma Territory was an organized territory of the United States from May 2, 1890 until November 16, 1907, when Oklahoma became the 46th state. It was made up of the western area of what is now the state of Oklahoma. The eastern area consisted of the last remaining part of Indian Territory.

Lands that came to make up Oklahoma Territory

All content from Kiddle encyclopedia articles (including the article images and facts) can be freely used under Attribution-ShareAlike license, unless stated otherwise. Cite this article:
Oklahoma Territory Facts for Kids. Kiddle Encyclopedia.