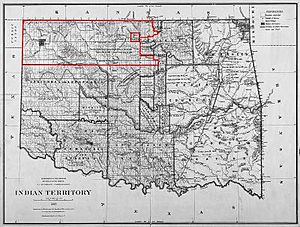 The Cherokee Outlet, more often referred to as the Cherokee Strip, was located in what is now the state of Oklahoma, in the United States. It was a sixty-mile (97 km) wide strip of land south of the Oklahoma-Kansas border between the 96th and 100th meridians.

All content from Kiddle encyclopedia articles (including the article images and facts) can be freely used under Attribution-ShareAlike license, unless stated otherwise. Cite this article:
Cherokee Outlet Facts for Kids. Kiddle Encyclopedia.