Cattle drives in the United States facts for kids 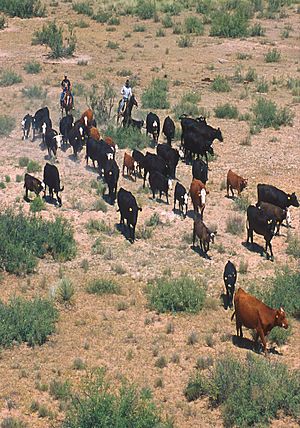 Cattle drives were a major economic activity in the 19th-century American West, particularly between 1866 and 1886, when 20 million cattle were herded from Texas to railheads in Kansas, for shipments to stockyards in Chicago and points east. The long distances covered, the need for periodic rests by riders and animals, and the establishment of railheads led to the development of "cow towns" across the frontier.

Cattle drives represented a compromise between the desire to get cattle to market as quickly as possible and the need to maintain the animals at a marketable weight.

On average, a single herd of cattle on a long drive (for example, Texas to Kansas railheads) numbered about 3,000 head. To herd the cattle, a crew of at least 10 cowboys was needed, with three horses per cowboy. Cowboys worked in shifts to watch the cattle 24 hours a day, herding them in the proper direction in the daytime and watching them at night to prevent stampedes and deter theft. The crew also included a cook, who drove a chuck wagon, usually pulled by oxen, and a horse wrangler to take charge of the remuda (spare horses). The wrangler on a cattle drive was often a very young cowboy or one of lower social status, but the cook was a particularly well-respected member of the crew, as not only was he in charge of the food, he also was in charge of medical supplies and had a working knowledge of practical medicine. 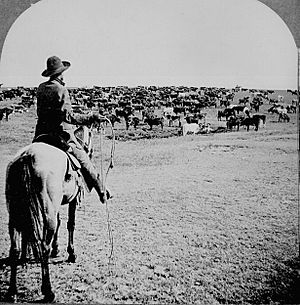 Cattle herd and cowboy, circa 1902

Long-distance cattle driving was traditional in Mexico, California and Texas, and horse herds were sometimes similarly driven. The Spaniards had established the ranching industry in the New World, and began driving herds northward from Mexico beginning in the 1540s. Small Spanish settlements in Texas derived much of their revenue from horses and cattle driven into Louisiana, though such trade was usually illegal. Cattle driving over long distances also took place in the United States, although infrequently. Relatively long-distance herding of hogs was also common. In 1815 Timothy Flint "encountered a drove of more than 1,000 cattle and swine" being driven from the interior of Ohio to Philadelphia. The stock in settled areas was gentle, often managed on foot. 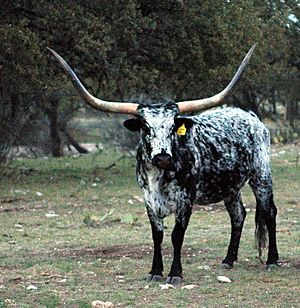 The Texas longhorn was originally driven overland to the railheads in Kansas; they were replaced with shorter-horned breeds after 1900.

As early as 1836, ranchers in Texas began to drive cattle along a "Beef Trail" to New Orleans. In the 1840s, cattle drives expanded northward into Missouri. The towns of Sedalia, Baxter Springs, Springfield, and St. Louis became principal markets. The Shawnee Trail, also known as the Texas Road or Texas trail, played a significant role in Texas as early as the 1840s. But by 1853, as 3,000 cattle were trailed through western Missouri, local farmers blocked their passage and forced herds to turn back because the Longhorns carried ticks that carried Texas fever. Texas cattle were immune to this disease; but the ticks that they left behind infected the local cattle. By 1855 farmers in western and central Missouri formed vigilance committees, stopped some of the herds, killed any Texas cattle that entered their counties, and a law, effective in December of that year, was passed, banning diseased cattle from being brought into or through the state. Therefore, drovers took their herds up through the eastern edge of Kansas; but there, too, they met opposition from farmers, who induced their territorial legislature to pass a protective law in 1859.

During the 1850s, emigration and freighting from the Missouri River westward also caused a rise in demand for oxen. In 1858, the firm of Russell, Majors and Waddell utilized about 40,000 oxen. Longhorns were trained by the thousands for work oxen. Herds of longhorns also were driven to Chicago, and at least one herd was driven all the way to New York. The gold boom in California in the 1850s also created a demand for beef and provided people with the cash to pay for it. Thus, though most cattle were obtained locally or from Mexico, very long drives were attempted. Even the Australians began cattle drives to ports for shipment of beef to San Francisco and, after freezing methods were developed, all the way to Britain. In 1853 the Italian aristocrat Leonetto Cipriani undertook a drive from St. Louis to San Francisco along the California Trail; he returned to Europe in 1855 with large profits.

The war blocked access to eastern markets. During the Civil War, the Shawnee Trail was virtually unused. Texas cattle numbers grew significantly in that period, and after the war could not be sold for more than $2 a head in Texas. By 1866 an estimated 200,000 to 260,000 surplus cattle were available.

In 1865 at the end of the Civil War, Philip Danforth Armour opened a meat packing plant in Chicago known as Armour and Company, and with the expansion of the meat packing industry, the demand for beef increased significantly. By 1866, cattle could be sold to northern markets for as much as $40 per head, making it potentially profitable for cattle, particularly from Texas, to be herded long distances to market.

By 1867, a cattle shipping facility owned by Joseph G. McCoy opened in Abilene, Kansas. Built west of farm country and close to the railhead at Abilene, the town became a center of cattle shipping, loading over 36,000 head of cattle in its first year. The route from Texas to Abilene became known as the Chisholm Trail, named for Jesse Chisholm who marked out the route. It ran through present-day Oklahoma, which then was Indian Territory, but there were relatively few conflicts with Native Americans, who usually allowed cattle herds to pass through for a toll of ten cents a head. Later, other trails forked off to different railheads, including those at Dodge City and Wichita, Kansas. By 1877, the largest of the cattle-shipping boom towns, Dodge City, Kansas, shipped out 500,000 head of cattle.

Other major cattle trails, moving successively westward, were established. In 1867 the Goodnight-Loving Trail opened up New Mexico and Colorado to Texas cattle. By the tens of thousands cattle were soon driven into Arizona. In Texas itself cattle raising expanded rapidly as American tastes shifted from pork to beef. Caldwell, Dodge City, Ogallala, Cheyenne, and other towns became famous because of trail-driver patronage. 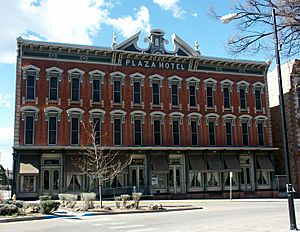 The Plaza Hotel in Las Vegas, New Mexico opened a year after the railroad established it as a key railhead for the cattle drives.

Cattle towns flourished between 1866 and 1890 as railroads reached towns suitable for gathering and shipping cattle. The first was Abilene, Kansas. Other towns in Kansas, including Wichita and Dodge City, succeeded Abilene or shared its patronage by riders fresh off the long trail. In the 1880s Dodge City boasted of being the "cowboy capital of the world." Communities in other states, including Ogallala, Nebraska; Cheyenne, Wyoming; Miles City, Montana; and Medora, North Dakota, served the trade as well. Amarillo, Fort Worth, and Wichita Falls, all in Texas; Prescott, Arizona, Greeley, Colorado, and Las Vegas, New Mexico were regionally important.

The most famous cattle towns like Abilene were railheads, where the herds were shipped to the Chicago stockyards. Many smaller towns along the way supported open range lands. Many of the cow towns were enlivened by buffalo hunters, railroad construction gangs, and freighting outfits during their heyday. Cattle owners made these towns headquarters for buying and selling.

End of the open range

Waiting for a Chinook, by C.M. Russell. Overgrazing and harsh winters were factors that brought an end to the age of the Open Range 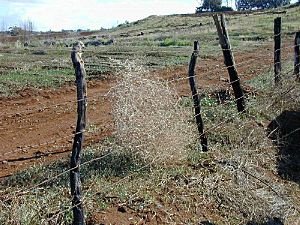 Introduction of barbed wire fences marked the closure of the open range.

Expansion of the cattle industry resulted in the need for additional open range. Thus many ranchers expanded into the northwest, where there were still large tracts of unsettled grassland. Texas cattle were herded north, into the Rocky Mountain west and the Dakotas. In 1866, Nelson Story used the Bozeman Trail to successfully drive about 1000 head of longhorn cattle into the Gallatin Valley of Montana. Individual cattle barons such as Conrad Kohrs built up significant ranches in the northern Rockies. In 1866, Kohrs purchased a ranch near Deer Lodge, Montana from former Canadian fur-trader Johnny Grant. At its peak, Kohrs owned 50,000 head of cattle, grazing on 10 million acres (40,000 km²), spread across four states and two Canadian Provinces and shipping 10,000 head of cattle annually to the Chicago stock yards.

Later, however, continued overgrazing, combined with drought and the exceptionally severe winter of 1886–1887 wiped out much of the open-range cattle business in Montana and the upper Great Plains. Following these events, ranchers began to use barbed wire to enclose their ranches and protect their own grazing lands from intrusions by others' animals.

In the 1890s, herds were still occasionally driven from the Panhandle of Texas to Montana. However, railroads had expanded to cover most of the nation, and meat packing plants were built closer to major ranching areas, making long cattle drives to the railheads unnecessary. Hence, the age of the open range was gone and the era of large cattle drives were over. 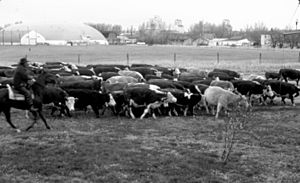 Smaller cattle drives continued at least into the 1940s, as ranchers, prior to the development of the modern cattle truck, still needed to herd cattle to local railheads for transport to stockyards and packing plants. Today, cattle drives are primarily used to round up cattle within the boundaries of a ranch and to move them from one pasture to another, a process that generally lasts at most a few days. Because of the significance of the cattle drive in American history, some working ranches have turned their seasonal drives into tourist events, inviting guests in a manner akin to a guest ranch to participate in moving the cattle from one feeding ground to the next. While horses are still used in many places, particularly where there is rough or mountainous terrain, the all-terrain vehicle is also used. When cattle are required to move longer distances, they are shipped via truck.

Events intended to promote the western lifestyle may incorporate cattle drives. For example, the Great Montana Centennial Cattle Drive of 1989 celebrated the state of Montana's centennial and raised money for a college scholarship fund as 2,400 people (including some working cowboys), 200 wagons and 2,800 cattle traveled 50 miles in six days from Roundup to Billings along a major highway. Similar drives have been sponsored since that time. 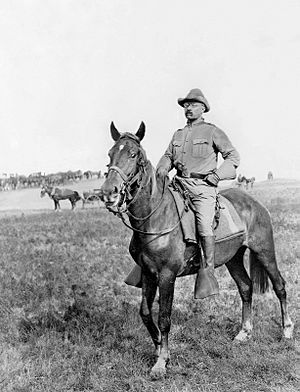 Theodore Roosevelt (shown on horseback,1898) helped popularize the image of the American cowboy through his writings.
Main page: cowboy

The cowboy's distinctive working gear, most of it derived from the Mexican vaquero, captured the public image. High-crowned cowboy hat, high-heeled boots, leather chaps, pistol, rifle, lariat, and spurs were functional and necessary in the field, and fascinating on the movie screen.

Increasingly the public identified the cowboy with courage and devotion to duty, for he tended cattle wherever he had to go, whether in bogs of quicksand; swift, flooding rivers; or seemingly inaccessible brush.

All content from Kiddle encyclopedia articles (including the article images and facts) can be freely used under Attribution-ShareAlike license, unless stated otherwise. Cite this article:
Cattle drives in the United States Facts for Kids. Kiddle Encyclopedia.