Spanish colonization of the Americas facts for kids 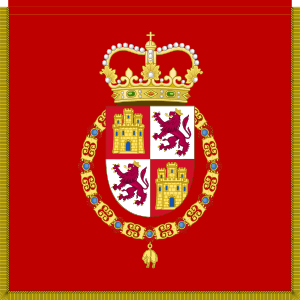 Flag of Spanish conquistadors with crown of Castile on a red flag, used by Hernán Cortés, Francisco Pizarro and others

The Spanish expanded their territories in America over four centuries until it included Central America, most of South America, Mexico, the South of what today is Southern United States, the Western part of what today is Central United States, the Southwestern part of what today is British Columbia in Canada, and even reaching Alaska. At the beginning of the nineteenth century, the Spanish possessions in America began a series of independence movements, which lead to the complete separation from Spain by the mid 1820's of Mexico, and the colonies in Central and South American. The remaining Spanish colonies, Cuba and Puerto Rico, were lost in 1898 as a consequence of the Spanish-American War.

All content from Kiddle encyclopedia articles (including the article images and facts) can be freely used under Attribution-ShareAlike license, unless stated otherwise. Cite this article:
Spanish colonization of the Americas Facts for Kids. Kiddle Encyclopedia.