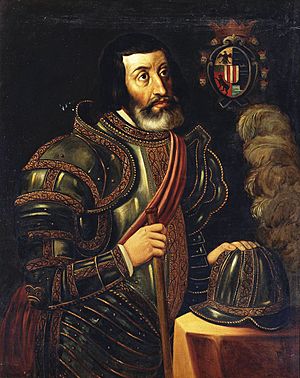 Hernán Cortés (1485 - 2 December 1547) was an explorer and conqueror from Spain. Between 1519 and 1521, he conquered the Aztec empire of emperor Montezuma II where Mexico is today.

Cortes was born Medellín, Extremadura province, in the Kingdom of Castile in Spain. He went to Salamanca University, but dropped out at the age of 17. After two years, Cortes failed and finished schooling, returning home. This, however, was later helpful, as he knew how the law of Spain worked.

Hernan's journeys started in 1502 when he had heard stories about the New World. He then went on a journey led by Nicolas de Ovando and Diego Velazquez to the West Indies. He turned out to be a good soldier under the orders of Velázquez.

No portraits made during Hernan Cortes' lifetime exist, but the best known account of the conquest of the Aztec Empire, written by Bernal Diaz del Castillo, gives a detailed description of Hernan Cortes' physical appearance:

"He was of good stature and body, well proportioned and stocky, the color of his face was somewhat grey, not very cheerful, and a longer face would have suited him more. His eyes seemed at times loving and at times grave and serious. His beard was black and sparce, as was his hair, which at the time he sported in the same way as his beard. He had a high chest, a well shaped back and was lean with little belly."

Conquest of Hispaniola and Cuba

He went to the New World in 1506. In 1511, he took part in the Spanish conquest of Hispaniola and Cuba, where the Arawak people lived. In 1513, the Spanish built the town Bayamo. The next year, they built Trinidad, Santo Espiritu, Puerto Principe, and Santiago de Cuba.

In 1519, Cortes set out from Cuba with a fleet of ships, 600 men, and about 20 horses. They went to Yucatán to look for gold and to get Mexico ready for colonization. They landed in Yucatán Peninsula and met Jeronimo de Aguilar, a priest who lived through a shipwreck. He knew a lot about the Maya, who owned this section of land.

Cortes took over Yucatán by winning a battle against the people of Tabasco.

He met a woman, La Malinche, who knew the Maya and Nahuatl languages. She acted as his translator when he talked with Maya and Aztec people.

In July of 1519, the Spanish took over Veracruz, and left 100 men there. That August, Cortes went to Tenochtitlan, the capital of the Aztec Empire. He brought 400 men, 15 horsemen, and 15 cannons with him. On his way, he met Native Amercian tribes like the Nahuus of Tlaxcala and the Totonaes of Cempoaly.

In October 1519, Cortes gathered his soldiers and around three thousand Tlaxcalteca (who did not like the Aztecs). His goal was to scare the Aztecs in Tenochtitlan. He then went on a killing spree and burned down the city. When he came to Tenochtitlan, he had a vast army of Aztec enemies.

Cortés was surprised that Tenochtitlan was as great as Constantinople. In November, the emperor of the Aztecs, Moctezuma II, welcomed Cortes and his army. Montezuma II let them into Aztec territory, where they learned the Aztecs' weaknesses and then destroyed them. The emperor gave them gold, and Cortes later told King Charles V that the Aztecs might have thought he was one of their gods: Quetzalcoatl, a feathered serpent with fair skin and a beard. Cortes quickly realized that some Spaniards had been attacked on the coast and planned to kidnap Moctezuma and his house and make him swear loyalty to King Charles V.

On the night of June 30 – July 1, 1520 the Aztecs attacked, but the majority of the Spanish escaped and allied themselves with enemies of the Aztec empire. Later, in 1521, with his army of a few Spaniards and many natives, Cortés destroyed Tenochtitlan and took over the Aztec Empire.

Cortés returned from Honduras and was Governor of the Viceroyalty of New Spain for a while. Later, he went back to Europe with a lot of treasure. He died in Seville, Spain, in 1547 from pleurisy.

All content from Kiddle encyclopedia articles (including the article images and facts) can be freely used under Attribution-ShareAlike license, unless stated otherwise. Cite this article:
Hernán Cortés Facts for Kids. Kiddle Encyclopedia.