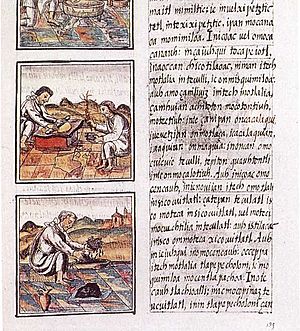 Page 51 of Book IX from the Florentine Codex. The text is in Nahuatl written in the Latin alphabet.

The Nahuatl language is a language spoken by 1.5 million people in Mexico. A classical form of the language was spoken by the Aztecs, the Toltecs and perhaps by the people of Teotihuacan. Since the end of the Aztec empire, several dialects of Nahuatl started to exist. Nowadays people who speak different Nahuatl dialects do not always understand each other.

Some English words from Nahuatl origin are:

According to John Lipski, most "Mexicanisms" – phrases that are unique to Mexican Spanish – come from Nahuatl. One example is ándale (often meaning "let's go"). Another is the word Bueno?, which many Spanish speakers use when they answer the telephone.

All content from Kiddle encyclopedia articles (including the article images and facts) can be freely used under Attribution-ShareAlike license, unless stated otherwise. Cite this article:
Nahuatl Facts for Kids. Kiddle Encyclopedia.