The cacao tree is a small tree originally grown in tropical South America. It only grows to 4 to 8 meters in height. Its seeds are called cocoa and are used to produce cocoa butter, chocolate drinks, and chocolate. Now the trees are grown in plantations in many tropical countries.

Cacao is planted on over 70000 square kilometres worldwide with 40% of production coming from Côte d'Ivoire, Ghana, and Indonesia. Each country produces about 15%, with smaller amounts coming from Brazil, Nigeria, and Cameroon. 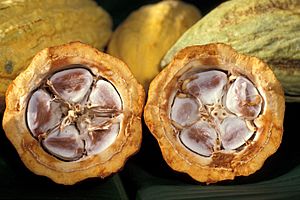 There are three main cultivar groups of cacao beans used to make cocoa and chocolate. The most prized, rare, and expensive is the Criollo Group, the cocoa bean used by the Maya. Only 10% of chocolate is made from the Criollo, which is less bitter and more aromatic than any other bean. The cacao bean in 80% of chocolate is made using beans of the Forastero Group. Forastero trees are significantly hardier than Criollo trees, resulting in cheaper cacao beans. Trinitario, a hybrid of Criollo and Forastero, is used in about 10% of chocolate. For details of processing, see cocoa.

Cacao beans were commonly used as currency in Pre-Columbian Mesoamerica. In some areas, such as Yucatán, they were still used in place of small coins as late as the 1840s.

All content from Kiddle encyclopedia articles (including the article images and facts) can be freely used under Attribution-ShareAlike license, unless stated otherwise. Cite this article:
Cacao tree Facts for Kids. Kiddle Encyclopedia.