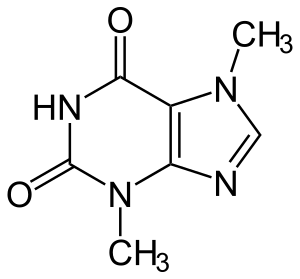 Theobromine is a chemical substance, also known as xantheose. It is an alkaloid. It occurs in the cacao plant. Chemically, it is very similar to caffeine. Because the cacao plant is used to make chocolate, it is also found in chocolate. Despite its name, there is no bromine in it. The name "theobromine" comes from the word "Theobroma" as the name of the genus of the cacao tree (which itself is made up of the Greek roots theo ("God") and brosi ("food"), meaning "food of the gods") with the suffix "-ine" given to alkaloids and other base nitrogen-containing compounds.

Theobromine is a water-insoluble, crystalline, bitter powder. Its colour is listed as either white or colourless. It has a similar, but lesser, effect to caffeine, making it a lesser homologue. Theobromine is an isomer of theophylline as well as paraxanthine. Theobromine is categorized as a dimethyl xanthine, which means it is a xanthine with two methyl groups.

Theobromine was first isolated from the seeds of the cacao tree in 1878 and then shortly afterwards was synthesized from xanthine by Hermann Emil Fischer.

Theobromine is toxic to dogs.

All content from Kiddle encyclopedia articles (including the article images and facts) can be freely used under Attribution-ShareAlike license, unless stated otherwise. Cite this article:
Theobromine Facts for Kids. Kiddle Encyclopedia.