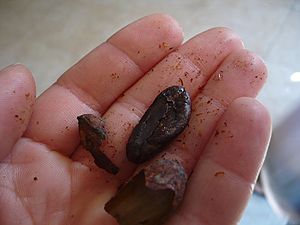 For the drink, see Hot chocolate. 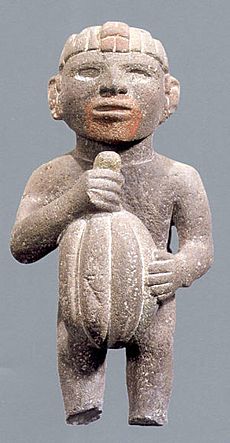 Chocolate and cocoa are made from the beans of the cacao tree. The tree might have first come from the foothills of the Andes Mountains near the Amazon River and the Orinoco River in South America. The tree was brought to Central America by the ancient Mayas, and was grown in Mexico by the Toltecs and later by the Aztecs.

Cocoa was an important product in Pre-Columbian Mesoamerica. People who told the story of the conquest of Mexico by Hernán Cortés said that when Moctezuma II, emperor of the Aztecs, ate dinner he took no other drink than chocolate, served in a golden goblet and eaten with a golden spoon. Flavored with vanilla and spices, his chocolate was whipped into a froth that dissolved in the mouth. No less than 50 pitchers of the drink were prepared for the emperor each day, and 2000 more for nobles of his court.

Chocolate was brought to Europe by the Spaniards and became a popular drink by 1700. They also brought the cacao tree to the West Indies and the Philippines. It was used in alchemical processes, where it was known as Black Bean.

The cacao plant was first given its name by Swedish natural scientist Carl von Linné (1707-1778), who called it "theobroma cacao" or "food of the gods". 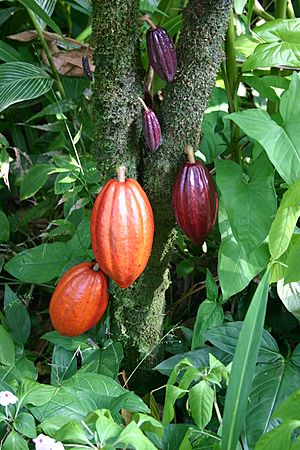 Pods at various stages of ripening 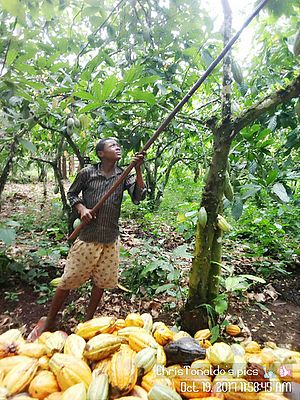 A pod has a rough leathery rind about 3 cm (1¼ inch) thick. It is filled with slimy pinkish pulp, sweet but inedible, enclosing from 30 to 50 large almond-like seeds or "beans" that are fairly soft and pinkish or purplish in color. As soon as they ripen, the pods are removed with a curved knife on a long pole, opened with a machete, and left to dry until taken to fermentation.

Then the beans are removed and piled in heaps, bins, or on grates where, during several days of "sweating", the thick pulp ferments until it thins and trickles off. The quality of the beans, which originally have a strong bitter taste, depends upon this sweating. If it is overdone they may be ruined; if underdone they have a flavor like raw potatoes and are susceptible to mildew.

Then the beans are spread out, constantly raked over, and dried. On large plantations this is done on huge trays, either outdoors by sunshine or in sheds by artificial heat. However, thousands of tons from smaller producers are dried on small trays or on cowhides. Finally, the beans are trodden and shuffled about (often using bare human feet) and sometimes, during this process red clay mixed with water is sprinkled over the beans to obtain a finer color, polish, and protection against molds during shipment to factories in the United States, the Netherlands, United Kingdom, and other countries. About 3,000,000 tonnes of cocoa are grown each year. The Netherlands is the leading cocoa processing country, followed by the U.S. 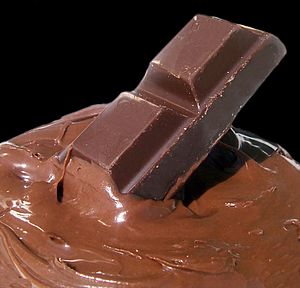 Uses of cocoa are numerous. It may be used in cakes, creams, drinks, toppings.

Besides its use as a food, by use of the scientific process it has been determined that cocoa is beneficial for health. Cocoa has nearly twice the anti-cancer antioxidants of red wine, and up to three times those found in green tea.

Problems with growth and sale

All content from Kiddle encyclopedia articles (including the article images and facts) can be freely used under Attribution-ShareAlike license, unless stated otherwise. Cite this article:
Cocoa Facts for Kids. Kiddle Encyclopedia.