Cocoa is a city in Brevard County, Florida. The population was 19,041 at the 2020 United States Census. It is part of the Palm Bay–Melbourne–Titusville Metropolitan Statistical Area.

Several stories circulate among Cocoa old timers as to how the town got its name. One story says that the mail used to come by river boat and was placed in an empty tin box labeled Baker's Cocoa. The box was nailed to a piling in the river next to downtown. Additionally, an early hotel in the area, located on the Indian River lagoon, was named Cocoa House.

Cocoa's business district was destroyed by fire in 1890, but soon, significant development began to occur with the extension of the Jacksonville, St. Augustine, and Indian River Railway to Cocoa.

The city was chartered in 1895. In the winter of 1894-1895, Cocoa experienced a second economic setback when the "Great Freeze" destroyed the citrus crop and forced many citrus workers to seek new occupations. According to one source, by 1903, the population of Cocoa had dropped to 382.

During the second decade of the 20th century, population growth and economic development in Cocoa accelerated. The state business directory of 1911-1912 set the population at 550. By 1925, the population was estimated at 1,800. During the Great Depression, the local economy declined and the two local banks failed. Still, by 1930, the population had risen to 2,200.

The population rose dramatically following the development of the space industry, quadrupling from 3,098 in 1940 to 12,244 in 1960. Cocoa and the surrounding area also became integrated with the tourist industry for the first time as thousands visited the area to witness the launches from Cape Canaveral. By 1980, the population had grown to 16,096.

Education was segregated until the 1960s, at which time Monroe High School and elementary schools for black students were closed.

In 1964, the Cocoa Expo Sports Center (Cocoa Stadium) was built for the Colt 45s spring baseball training and Grapefruit League games. The team later became the Houston Astros. In the early 1980s, the city attempted to upgrade the stadium by asking the Astros to pay for needed repairs. In 1985, the team responded by moving its training to Osceola County Stadium in Kissimmee. As a result, it was decided that future negotiations with major league teams would be done by the county government.

Clearlake Middle School was closed in 2013. Students were moved to Cocoa High School, which was converted to a junior and senior high school.

The Cocoa Bird Count has annually counted species of birds in or near Cocoa since 1950. In 2010, it counted 150 species. There was an annual "Christmas Bird Count" before this, starting in 1900. 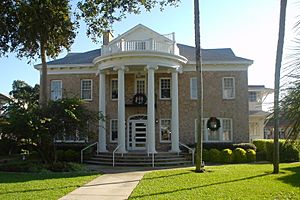 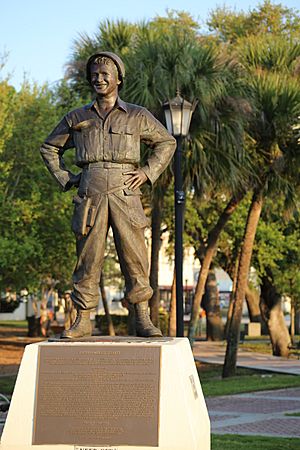 According to the 2013 American Community Survey:

Construction and retail trade are the two largest industries by employment in Cocoa as of 2017. In 2008, Kel-Tec CNC Industries, located in Cocoa, was the third-largest manufacturer of pistols in the United States. Cocoa has 1,381 registered businesses that include light manufacturing and industrial, retail and office businesses as of 2017. Cocoa hosts one of the facilities building SpaceX Starship.

The city area has the following educational institutions:

All are at least four-lane roads, unless otherwise designated.

The Florida East Coast Railway runs through Cocoa. Into the early 1960s, passengers could take one of two Chicago-bound trains (on alternating days), the City of Miami or the South Wind (both via Birmingham) and the New York-bound East Coast Champion, Havana Special, and Miamian from the Florida East Coast Railway's Cocoa-Rockledge station. Into the latter 1950s, passengers could take the Dixie Flagler to Chicago via Atlanta from the station. All passenger trains along the FEC were suspended in 1963 due to a strike. The FEC resumed local passenger service between Jacksonville and the Miami area from 1965 until July 31, 1968. 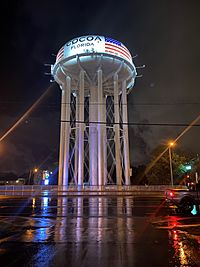 Updated livery of the Cocoa water tower at night, as seen from US Route 1.

Since 1957, Cocoa has supplied the communities of central Brevard County with potable water. Cocoa made major investments in the water supply and treatment facilities needed to produce a sub-regional water system. 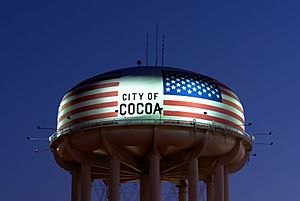 Cocoa water tower in 2009, with the original bicentennial paint scheme.

The flag was originally painted on the water tower free of charge by a Greek immigrant. He wanted to decorate the tower in time for the United States Bicentennial celebration in 1976. In 2014, the City re-furbished and re-painted the tower with the iconic American flags.

All content from Kiddle encyclopedia articles (including the article images and facts) can be freely used under Attribution-ShareAlike license, unless stated otherwise. Cite this article:
Cocoa, Florida Facts for Kids. Kiddle Encyclopedia.