Kids Encyclopedia Facts
Not to be confused with Broward County, Florida.

Brevard County is a county in the state of Florida. As of the 2010 census, the population was 543,376, making it the 10th largest county in Florida. The official county seat has been located in Titusville since 1894. Brevard County comprises the Palm Bay–Melbourne–Titusville, FL Metropolitan Statistical Area. It is located along the east Florida coast along the Atlantic Ocean.

Influenced by the presence of the John F. Kennedy Space Center, Brevard County is also known as the Space Coast. As such, it was designated with the telephone area code 321, as in 3-2-1 liftoff. The county is named after Theodore Washington Brevard, an early settler, and state comptroller.

The history of Brevard County can be traced to the prehistory of native cultures living in the area from pre-Columbian times to the present age. The geographic boundaries of the county have changed significantly since its founding. The county is named for Judge Theodore W. Brevard, an early setter, and state comptroller.

In federal maps printed before 2012, nearly half of Brevard was prone to flooding. Most of this was in the relatively undeveloped low-lying areas, west of Interstate 95, on the banks of the St. Johns River. About 18,900 homes out of 164,000 single-family homes were in that area. 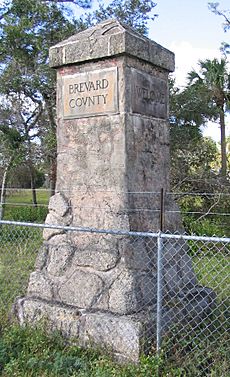 Located halfway between Jacksonville and Miami, Brevard County extends 72 miles (116 km) from north to south, and averages 26.5 miles (42.6 km) wide. Marshes in the western part of this county are the source of the St. Johns River. Emphasizing its position as halfway down Florida is the presence of two roads that are halfway down Florida's numbering system, State Road 50 and State Road 500.

The Atlantic Intracoastal Waterway along the eastern edge of Brevard County is the major waterway route in Brevard County. It includes the Indian River. Additional waterways include Lake Washington, Lake Poinsett, Lake Winder, Sawgrass Lake, the St. Johns River, and the Banana River. Dredging for the Intracoastal created 41 spoil islands in the Brevard portion of the Indian River.

The United States Board on Geographic Names is considering two proposals to officially name the barrier island extending from Port Canaveral to Sebastian Inlet. The 45-mile-long (72 km) island includes the city of Cape Canaveral, Cocoa Beach, Indialantic, Melbourne Beach, Patrick Air Force Base, and Satellite Beach. The American Indian Association of Florida submitted in October 2011 a proposal to name the island after the Ais people. The United Third Bridge and the Florida Puerto Rican/Hispanic Chamber of Commerce in Melbourne submitted in January 2012 a proposal to name the island after Juan Ponce de León. The Board of Geographic Names usually takes at least eight months to decide on a new name for a geographical feature.

There are 16 municipalities. The largest by population is Palm Bay, the smallest Melbourne Village.

The county has eight canals for transportation and drainage:

The county has a Köppen climate classification of Cf with a year-round distribution of rainfall. This means a humid subtropical climate with hot, humid summers. There are distinct wet and dry seasons. The dry lasts from December through May, the wet from June through November. During the dry season, periods of drought often occur, and can lead to a persistent and high wild land fire threat. In numerous instances these fires have caused property damage. In one case several fires in 2008 forced the evacuation of Bayside Highschool In the town of Palm Bay. In this particular event 162 homes were damaged.

Florida is a large subtropical state that experiences hurricanes. Although Brevard county is located along Florida's eastern peninsula, it is less frequently impacted by direct hurricane landfalls than portions of the Panhandle or South Florida. There are two predominant reasons for this. First, westward moving tropical systems often reach an atmospheric ridge weakness in the Bermuda High by the time they approach Florida at a latitude as northerly as Brevard County. Combined with frontal systems that exit the United States' East Coast, many of these tropical systems are steered northwest and eventually curve northward offshore along Florida's East Central Coast. A second reason is that hurricanes landfalling along the Florida peninsula Gulf Coast often weaken to a tropical storm by the time they move northeast to affect Brevard County (with some exceptions, such as 2004's Charley). No major hurricane, defined as category 3 or higher, has ever struck Brevard since 1850, the beginning of recorded climate.

Although Brevardians may refer to past storms as "hurricanes", by the time they strike there, some of them may have subsided to tropical storms or depressions. Because of the threat of storm surge, the beach community on the barrier island is often required to evacuate well in advance of the storm. The possibility of storm surge is diminished when the storm comes across the state instead of from the Atlantic.

Tornado-like eddies spinning off from even small storms can result in severe damage in small areas. Generally, summertime tornadoes are brief, are at the EF0 or EF1 level, and may not actually touch down. During the dry season, they can attain a force of EF2 and touch the ground for miles. While tornadoes in the Midwest are more severe, a higher rate of deaths are experienced in Florida, and Brevard County, specifically, due to higher population density and quantity of manufactured homes. 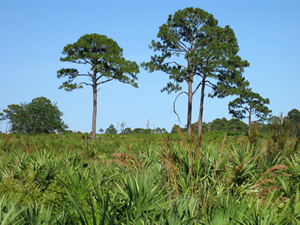 Brevard County works together with the federal and state government to control pollution and preserve wetlands and coastal areas through lands dedicated to conservation and wildlife protection.

There are 4,000 species of animals locally. Common mammals include North American river otters, bobcats, white-tailed deer, raccoons, marsh rabbits, and opossum. Feral pigs, introduced by Europeans, present an occasional traffic hazard. Lovebug season occurs twice annually in May and August–September. Motorists, usually, encounter swarms of these while driving during a four-week period. Deer flies are particularly noticeable from April through June. There were 596 manatees in Brevard County in 2009, out of a total of 3,802 in the state. This is a decline from 2007 when there was a total of 859 out of a state total of 2,817. Bottlenose dolphin are commonly seen in the intercoastal waterway. The poisonous brown recluse spider is not native to the area but has found the environment congenial. The Florida Butterfly Monitoring Network has counted species of butterflies monthly for a year since 2007. In 2010, it counted 45 species. Included are zebra swallowtail butterflies. Fish and reptiles include alligators, red snapper, sea turtles, scrub lizards, and rat snakes. There are an estimated 3,500 gopher tortoises in the county. They are on the endangered list.

North Atlantic right whales give birth near the coast of Brevard, among other places, from November 15 to April 15. They are rare, a protected species.

Turkey vultures, a migrating species, are protected by federal law. They migrate north in the summer and return in September.

The county's most common winter bird is the lesser scaup, a diving duck. In 2008, half a million were counted. In 2010, 15,000 were estimated. Local bird counts indicate that there are at least 163 species of birds in the county. Other birds include the red-shouldered hawk, the loggerhead shrike, the endangered red-cockaded woodpecker, Cooper's hawks, pileated woodpeckers, Savannah sparrows, rails (which also includes coots), Florida scrub jays (an endangered species), wood storks, grackles, great horned owls, northern mockingbirds, brown thrashers, catbirds, green-winged teals, greater yellowlegs, western sandpipers, least sandpipers, dowitchers, and American white pelicans. Peak migration in the fall is from the last week in September through the first week in October. Fall migration tends to be stronger than spring because birds typically take different flyways.

On the east coast of the state, mangroves have normally dominated the coast from Cocoa Beach southward. Northward these may compete with salt marshes moving in from the north, depending on the annual weather conditions.

In 2010, 8.3% of the population considered themselves to be of only "American" ancestry (regardless of race or ethnicity.)

From 2007 through 2010, the population has been essentially static.

In 2012, the Urban Institute ranked the Brevard metro fourth in the country for racial equality. Criteria were integration of neighborhoods, income, and the quality of schools minorities attend. The area was ranked first for Hispanic equality with whites.

In 2000, the following were counted by denomination:

According to the Secretary of State's office, Republicans are a plurality of registered voters in Brevard County.

The Brevard Zoo is a 75 acres (30 ha) facility that contains more than 650 animals representing more than 165 species from Florida, South America, Africa, Asia and Australia. The Zoo offers animal experiences including giraffe and lorikeet feedings, African kayak tours, paddle boats in the wetlands and a train ride.

The Space Coast Ballet incorporates professional principal dancers and instructors together with many roles for local senior talent as well as roles for students. They annually stage The Nutcracker.

The Space Coast has a number of museums from the rocket exhibitions at the Kennedy Space Center Visitor Complex and the Air Force Space & Missile Museum, to local museums and others of unique character, such as the American Police Hall of Fame & Museum.

The Kennedy Space Center Visitor Complex offers an educational look at the accomplishments of America's space program. The Observation Gantry near Launch Complex 39 offers a view of the Space Shuttle launch pads (first built for the Apollo missions), the Vehicle Assembly Building, and the crawlerway over which rockets are taken to the pad. The Apollo/Saturn V Center displays an example of the largest rocket ever launched.

The US Space Walk of Fame in Titusville commemorates the manned space program's history with museum and monuments.

The Brevard Museum of History & Natural Science features the remains of the "Windover Man", the oldest human remains found on the North American continent, and a re-creation of the Windover Dig, a "wet" archaeological site. A visitor may see how Native Americans lived and Florida pioneers survived.

Honor America runs the Liberty Bell Memorial Museum. This houses a replica of the Liberty Bell, historical documents, and patriotic memorabilia. Items are permanent reminders of our nation's history, as well as a memorial to military veterans.

During the December holiday season, each of four yacht club parades during the evening in the Indian River/Banana River with holiday lighting on each boat.

All content from Kiddle encyclopedia articles (including the article images and facts) can be freely used under Attribution-ShareAlike license, unless stated otherwise. Cite this article:
Brevard County, Florida Facts for Kids. Kiddle Encyclopedia.