Kids Encyclopedia Facts
Not to be confused with Space Ghost. 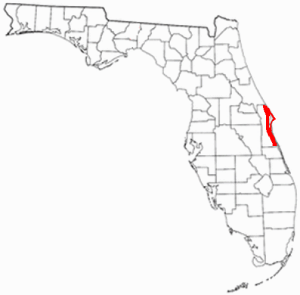 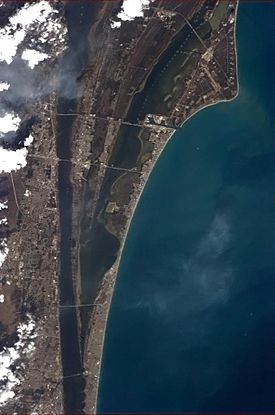 The Space Coast is a region in the U.S. state of Florida around the Kennedy Space Center (KSC) and Cape Canaveral Space Force Station. It is one of several "themed" coasts around Florida. All of NASA-launched crewed spaceflights (running from Project Mercury in 1961 to and from the end of the Space Shuttle program in 2011) have departed from either KSC or Cape Canaveral. The Air Force Station has also launched unmanned military and civilian rockets. Cities in the area include Titusville, Cocoa, Rockledge, Cape Canaveral, Merritt Island (unincorporated), Cocoa Beach, Melbourne, Satellite Beach, Indialantic, Melbourne Beach, Palm Bay, and Viera (unincorporated). Most of the area lies within Brevard County. It is bounded on the south by the Treasure Coast, on the west and north by Central Florida (and is economically tied to that region), and on the east by the Atlantic Ocean.

One reason rockets are launched in Florida has to do with the Earth's rotation. The Earth rotates most quickly at the equator, and to take advantage of this, in adding to the orbital velocity of the rocket, it is most beneficial to launch from a southerly location (near the equator). In addition, to take advantage of the direction of rotation of the planet, launching from a location on an easterly coast where there is no inhabited population where debris would land in an emergency would be ideal for both the safety of the people on the ground and for fuel efficiency of the rocket. The only locations in the United States capable of this are on the east coasts of Florida, Texas, and Puerto Rico, but given the high population densities in coastal Texas, South Florida, and Puerto Rico, the Space Coast is often considered the best location when all factors are taken into account.

Many places near the Cape are named for subjects relating to the US space program including vehicles, astronauts, and the spaceport itself.

("MILA" is an abbreviation for Merritt Island Launch Area")

All content from Kiddle encyclopedia articles (including the article images and facts) can be freely used under Attribution-ShareAlike license, unless stated otherwise. Cite this article:
Space Coast Facts for Kids. Kiddle Encyclopedia.