Melbourne is a city in Brevard County, Florida, United States. As of the 2010 census, the population was 76,068. The municipality is the second-largest in the county by both size and population. Melbourne is a principal city of the Palm Bay – Melbourne – Titusville, Florida Metropolitan Statistical Area. In 1969 the city was expanded by merging with nearby Eau Gallie.

Evidence for the presence of Paleo-Indians in the Melbourne area during the late Pleistocene epoch was uncovered during the 1920s. C. P. Singleton, a Harvard University zoologist, discovered the bones of a mammoth (Mammuthus columbi) on his property along Crane Creek, 1.5 miles (2.4 km) from Melbourne, and brought in Amherst College paleontologist Frederick B. Loomis to excavate the skeleton. Loomis found a second elephant, with a "large rough flint instrument" among fragments of the elephant's ribs. Loomis found in the same stratum mammoth, mastodon, horse, ground sloth, tapir, peccary, camel, and saber-tooth cat bones, all extinct in Florida since the end of the Pleistocene 10,000 years ago. At a nearby site a human rib and charcoal were found in association with Mylodon, Megalonyx, and Chlamytherium (ground sloth) teeth. A finely worked spear point found with these items may have been displaced from a later stratum. In 1925 attention shifted to the Melbourne golf course. A crushed human skull with finger, arm, and leg bones was found in association with a horse tooth. A piece of ivory that appeared to have been modified by humans was found at the bottom of the stratum containing bones. Other finds included a spear point near a mastodon bone and a turtle-back scraper and blade found with bear, camel, mastodon, horse, and tapir bones. Similar human remains, Pleistocene animals and Paleo-Indian artifacts were found in Vero Beach, 30 miles (48 km) south of Melbourne, and similar Paleo-Indian artifacts were found at Lake Helen Blazes, 10 miles (16 km) southwest of Melbourne. 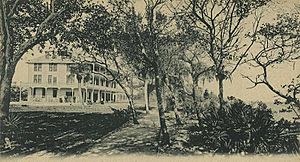 After the Civil War, pioneer families arrived, and Melbourne was founded in 1867 by former slaves.

The city, formerly called "Crane Creek", was named Melbourne in honor of its first postmaster, Cornthwaite John Hector, an Englishman who had spent much of his life in Melbourne, Australia. He is buried in the Melbourne Cemetery, along with many early residents in the area. The first school in Melbourne was built in 1883 and is on permanent exhibit on the campus of Florida Institute of Technology. By 1885, the town had 70 people. The Greater Allen Chapel African Methodist Episcopal Church was founded in 1885 and is still active.

In the late 1890s, the Brownlie-Maxwell Funeral Home opened and it is still in business. The oldest black-owned business in the county is Tucker's Cut-Rate plumbing. It opened in 1934.

In the early 1900s, houses were often built in the frame vernacular style.

In 1919, a fire destroyed most of the original downtown along Front Street. At the time, it was rebuilt west of US Hwy 1.

During the Jim Crow years, black people were required to enter movie theaters via a different entrance from whites and sit in the balcony. Gas stations had signs for rest rooms labeled "Men", "Women", and "Colored." This persisted until integration in the late 1960s.

In late 1942 the Naval Air Station Melbourne was established as a site to train newly commissioned Navy and Marine pilots for World War II. The program ran until 1946, and the land that was used for that program makes up most of what is currently the Melbourne International Airport.

In 1969, the cities of Eau Gallie and Melbourne voted to merge, forming modern-day Melbourne.

In the 1950s, Babcock Street was extended north to intersect with US 1. The Melbourne Shopping Center was constructed on Babcock, the area's first strip mall. Consumers were sufficiently attracted to this new mall, that the traditional downtown, off New Haven, suffered. Urban blight there was successfully attacked there in the 1980s.

A board was created by the legislature to spend a 10% tax on electric bills. This was used by the Melbourne Civic Improvement Board to build the Melbourne Auditorium, the first library and fire station, and various parks. The board was dissolved when Melbourne was merged with Eau Gallie in 1969.

In 1989, the city elected its first black councilman.

A 2009 Halloween street party sponsored by a downtown restaurant attracted an estimated 8,000–10,000 people. This overwhelmed the downtown area. Street parties were curtailed until public safety issues were addressed.

On 18 February 2017, president Donald J Trump held his first post-inauguration rally at the Orlando-Melbourne International drawing a crowd of 9,000.

The east-west street named Brevard Drive was historically the "center" of town; with addresses called "north" and "south" of this street. The north-south Babcock Street provided the same centerline for "east" and "west" directions.

Melbourne Beachside has a small presence on the South Beaches barrier island. It is often confused with Melbourne Beach, a separate political entity. 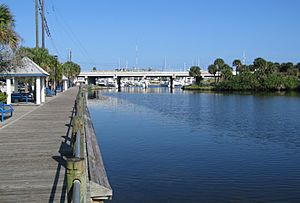 Melbourne averages 49 inches (1,200 mm) of rainfall annually, much of it coming in convective thunderstorms in the late May to early October time period. The record rainfall occurred on August 20, 2008, when Tropical Storm Fay dropped 18.21 inches (463 mm). Melbourne can sometimes have moderate to severe drought conditions from late fall through spring, with brush fires occurring and water restrictions put in place. The National Weather Service located at Melbourne International Airport averages 2.9 days per year with frost, although several years might pass without a frost in the city of Melbourne or at the ocean beaches. According to the National Weather Service, there is no record of snow or snow flurries in the city of Melbourne in that last 150 years.

Tropical flora typical of more southerly locations may be grown in the Melbourne area (coconut palms, royal palms, Christmas palms, and bananas), but may be damaged or killed when subjected to infrequent light freezes.

The Florida Department of Environmental Protection has ordered the city to reduce pollution of the Indian River Lagoon, which it borders; about 80% of the city's landmass drains in the direction of the lagoon. The city must reduce run-off by 44,000 pounds (20,000 kg) of nitrogen and 13,000 pounds (5,900 kg) of phosphorus. The city responded by banning the use of fertilizer before flood and storm warnings. 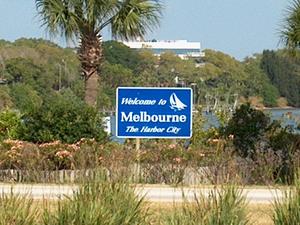 In February or March:

Museums and points of interest 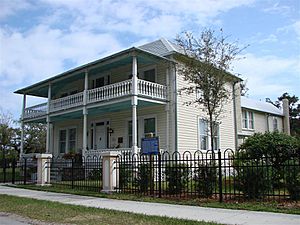 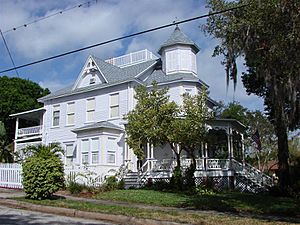 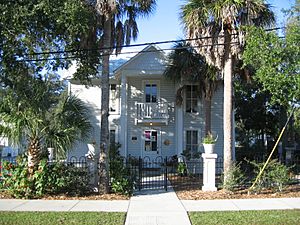 There are three places on the National Register of Historic Places:

The following places also are historic:

EAU GALLIE Arts District has an established historical walking tour that includes over 20 historical buildings or locations in the arts district.

One of the many forms of recreation is local fishing in places such as Lake Washington.

Melbourne Square, in the city of Melbourne, is located on US 192 west of downtown, is the largest shopping area in Brevard County. In the 1960s, the motto of Melbourne was, "Crossroads to the Universe".

EAU GALLIE SQUARE in the Eau Gallie Arts District is a public green space with live oaks and band shell that serves as the center of many community events.

All content from Kiddle encyclopedia articles (including the article images and facts) can be freely used under Attribution-ShareAlike license, unless stated otherwise. Cite this article:
Melbourne, Florida Facts for Kids. Kiddle Encyclopedia.