Indian Harbour Beach is a city in Brevard County, Florida. The population was 8,225 at the 2010 United States Census. It is part of the Palm Bay–Melbourne–Titusville Metropolitan Statistical Area. It is 3 miles (4.8 km) north of the town of Indialantic and south of Satellite Beach. It is the first and only community in the United States to be a NOAA Tsunami Ready community along the nation's East Coast.

Indian Harbour Beach is located in the region where tropical and temperate climatic zones interface. Daytime temperatures average 90 °F (32 °C) in the summer months and 72 °F (22 °C) in the winter months. A study commissioned by NASA lends credence to the notion that Indian Harbour Beach is located in a portion of the North American Atlantic shoreline with a uniquely reduced incidence of catastrophic hurricanes. 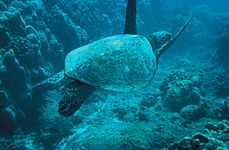 The 12 acres (4.9 ha) of wetland created as mitigation by a local developer on Samsons Island provide nutrient-rich, sheltered aquatic habitat serving as finfish nursery and feeding ground for a diverse assemblage of birds and mammals. The city established Samsons Island Nature Park, the only gopher tortoise relocation recipient site on the barrier island. It is occupied by 42 relocated tortoises and three which had been living on the island when development began. The city has erected five osprey nesting platforms on Samsons Island Nature Park, from which young have been fledged. Efforts are now under way to create habitat for use by gopher tortoises and scrub jays. The city is working with faculty of the Florida Institute of Technology to promote graduate student research and class projects on Samsons Island Nature Park and to assist in devising and implementing maintenance programs to preserve and enhance desirable wildlife habitats.

There are plant species, both indigenous and imported. Vegetated sand dunes are found along most of the beach's length and provide the major defense against storm events in the region. Native plant species found on the dunes include sea oats, Sabal palmetto, sea grape, railroad vine, dollar weed, coral bean, Spanish bayonet, wax myrtle, yaupon holly, and several grass species. More salt-tolerant and wind-tolerant species, such as sea oats and railroad vine, are found predominantly on the ocean side of the dune, while other dune vegetation species do not generally show such zonation. These plants assist in building the dune by trapping windblown sand and in stabilizing the dune with extensive lateral root systems.

There are approximately 10 acres (4.0 ha) of coquina rock outcrops frequently exposed along the low-tide line of Indian Harbour's ocean beach. The National Marine Fisheries Service has classified the rock as an Essential Fish Habitat-Habitat Area of Particular Concern. It is important to aquatic life and found only in a few locations along the Eastern seaboard.

On the Indian Harbour's ocean beach can be found fossil Atlantic ghost crabs, the remnants of a unique set of geological circumstances which preserved these creatures when they died in their burrows perhaps about 110,000 years ago.

There are significant deposits of sand, marl, coquina and possibly phosphate within the limits of Indian Harbour Beach.

There were 3,762 households out of which 21.9% had children under the age of 18 living with them, 50.8% were married couples living together, 9.5% had a female householder with no husband present, and 36.7% were non-families. 30.6% of all households were made up of individuals and 15.0% had someone living alone who was 65 years of age or older. The average household size was 2.17 and the average family size was 2.69.

In 2010, the town had the highest percentage of people with undergraduate degrees of any municipality measured in the county, 41%, compared with an average of 26% countywide.

In 2013, along with Palm Beach and Sanibel, Indian Harbour Beach ranked among the top 3 places to live in Florida according to AreaVibes livability score.

There are parks, recreational facilities and natural landscapes.

The Indian Harbour Beach Recreation Center is located in 27 acres (11 ha) Gleason Park on the corner of South Patrick Drive and Yacht Club Boulevard. The Recreation Department offers a wide variety of classes, services and activities, ranging from those for toddlers and preschoolers, to a Senior Leisure-time Club. Also located in the park is the City’s heated competition-size swimming pool – open seven days a week year-round, shuffleboard courts, two playgrounds, a walking/exercise trail and picnic facilities.

There is a private tennis club and a private yacht club. 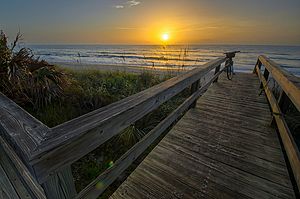 All content from Kiddle encyclopedia articles (including the article images and facts) can be freely used under Attribution-ShareAlike license, unless stated otherwise. Cite this article:
Indian Harbour Beach, Florida Facts for Kids. Kiddle Encyclopedia.