Palm Bay is a city in Brevard County, Florida, United States. The city's population was 119,760 at the 2020 United States Census, making it the most populous city in the county and the largest by land mass. The historic section of the city lies on the mouth of the Turkey Creek and the Palm Bay. Palm Bay has historically expanded south and to the west. The newer section is mostly situated west of Interstate 95 and south of the Tillman Canal.

Palm Bay is a principal city of the Palm Bay−Melbourne−Titusville Metropolitan Statistical Area, which had a population of 606,612 at the 2020 census.

The Timucua people, attracted to the mouth of Turkey Creek at the Indian River by freshwater springs, fish, oysters, and wildlife, are thought to have been the first inhabitants in the Palm Bay area.

Palm Bay's recent history began in the 1850s when the first European settlers built homes along Turkey Creek. Originally referred to as Tillman, the settlement was described as a "small strip of hammock...on each side of Turkey Creek...mostly pine and palmetto, miserable sandy barren oak scrub, some ponds and interspersed with sawgrass and gallberry."

By the mid-nineteenth century, there was a lumbering operation, packing house, and orange groves. Growth was slow until the arrival of the railroad in 1894. Then goods were brought in and produce was shipped to market faster. 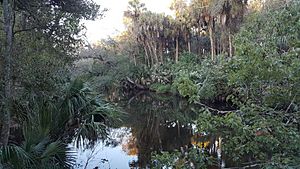 Between 1910 and 1914, Tillman became the center for a land company known as the Indian River Catholic Colony. Attempting to grow two crops a season, farmers quickly depleted the soil, and the colony failed. Those remaining built St. Joseph's Church on Miller Street, the oldest building still standing.

In the 1920s, the city was renamed after the bay bordered with sabal palm trees known as Palm Bay, located at the mouth of Turkey Creek. A group of Tillman businessmen established the Melbourne-Tillman Drainage District, and issued $1.5 million worth of bonds. Starting in 1922, a 180 miles (290 km) grid of 80 canals was dug to drain 40,000 acres (160 km2) of swampy land west of Palm Bay. The canals made it possible to control flooding and turn marsh lands to agricultural use. Farmers planted citrus groves and truck farms which shipped winter produce by the Florida East Coast Railroad to northern markets. Farmers sold timber and land to paper companies. In 1926, a fire among the dredges and a severe hurricane economically depressed Palm Bay. The Melbourne-Tillman Drainage District went bankrupt.

In 1959, General Development Corporation purchased and platted extensive tracts of land in Palm Bay for its large residential project known as Port Malabar. The city incorporated itself on January 16, 1960. Prior to expanding their borders, the city population was 2,808 that year.

For three consecutive years between 2003 and 2005, the city was made a finalist for the All-America City Award.

In 2008, the former Port Malabar Country Club property was revalued at $300,000, essentially "worthless" because of arsenic in the groundwater which would require an estimated $12 million to clean up.

There are hundreds of miles of roads that are in such poor condition that the city Public Works Department considers them unserviceable. The voters have consistently defeated measures which would have improved roads, termed the worst in Brevard. In 2005 they voted down a $58.7 million bond measure. In 2009, they defeated a $75.2 million tax referendum. In 2010, voters living in areas with the worst roads voted 9-1 against $44.7 million assessment for repairing them. In 2011, the city government created a Palm Bay Road Maintenance District that they hope can levy taxes and alleviate the situation.

In 2008, fires on Mother's Day destroyed 37 homes in the Southwest area of the city. Arson has been to blame as the cause of at least a few of the numerous fires.

In 2009, the Brevard Zoo moved the remaining 15 Florida scrub jay families native to the city to Buck Lake Conservation Area in Mims. The Florida scrub jay is a threatened species in the area due to it being territorial and its inability to move to better grounds when its habitat is jeopardized.

In 2010, plans were revealed by a private company to develop Emerald City, a large planned city within the city limits. The focus will be on creating an eco-friendly urban community that will include residential zones consisting of townhouses and commercial zones consisting of state-of-the-art medical facilities, research and development centers for technology firms, and urbanized retail shopping centers. As of February 2016, Emerald City is currently in the development phase.

Fiscal concern over firefighters' pensions occurred during 2010. Firefighters' salaries averaged $71,100 annually plus $5,590 overtime pay. They were eligible for 100% of base pay after 28 years of service.

In 2012, construction began on the St. John’s Heritage Parkway (also known as the Palm Bay Parkway), an arterial roadway that runs north to south along the western limits of the city. A portion of the parkway opened to the public in 2015. The project was in the development phase for over a decade. The roadway was planned out of a need to alleviate traffic for commuters on the main thoroughfares of SR 507, CR 509, and I-95. Later phases of the project will bring the roadway further south and then east following the lower city limits, eventually connecting to I-95 just north of Micco Road. There are other roadway improvement projects currently in the development phase, including widening SR 507 (Babcock Street) from four lanes to six.

The city formerly monitored some intersections with radar cameras, resulting in the issuing of traffic tickets for running a red light. In 2013, these monitored intersections were no safer than unmonitored ones. These cameras were removed in 2014.

The city is often referred to in four quadrants: Northwest, Northeast, Southwest, and Southeast, each containing multiple zip codes. The most urban area is in Northeast. The most rural area is in Southwest, containing an area called The Compound. This area is home to Bombardier Recreational Products. A small portion of Bayside Lakes lies in the area.

Palm Bay is developing its portion of Bayside Lakes "downtown" to create a focus for the city.

During the early 1990s, Palm Bay Regional Park, a soccer and athletic complex in the western part of the city, was constructed. It is the largest of a citywide system of parks and recreation areas. The Turkey Creek Sanctuary is a small nature reserve in the northeast part of the city.

As of 2000, English spoken as a first language accounted for 88.55% of all residents, while 11.44% spoke other languages as their mother tongue. The most significant was Spanish speakers who made up 7.45% of the population, while French came up as the third most spoken language, which made up 0.93%, German was spoken by 0.92%, and Arabic was at fourth, with 0.53% of the population.

Major roads in Palm Bay include the following:

There are about 851 miles (1,370 km) of city-maintained highways. Most roads in the area west of DeGroodt Road are unpaved. In 2013, the public works director reported that most roads in south Palm Bay were "failed roads," for lack of maintenance.

In 2012, Palm Bay had the lowest walkability of any city in the United States with a population over 100,000 people.

In 2018, The city's voters approved a bond referendum to pave the city's failing roadways. The city is repaving or reconstructing various sections or units each fiscal year.

Forbes magazine ranked the city the 11th most innovative in the nation in 2010.

The following corporations are located in the city:

The city has some frequently visited recreational locations, such as the area known as “the compound” and the Turkey Creek area. The city has a riverfront area that the city government is attempting to further develop and focus on.

All public schools are run by the Brevard County School Board.

All content from Kiddle encyclopedia articles (including the article images and facts) can be freely used under Attribution-ShareAlike license, unless stated otherwise. Cite this article:
Palm Bay, Florida Facts for Kids. Kiddle Encyclopedia.