Titusville is a city in and the county seat of Brevard County, Florida, United States. The city's population was 43,761 at the 2010 United States Census. Titusville is on the Indian River, west of Merritt Island and the Kennedy Space Center and south-southwest of the Canaveral National Seashore. It is a principal city of the Palm Bay–Melbourne–Titusville Metropolitan Statistical Area. 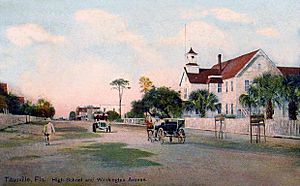 The area was once inhabited by the Ais Indians, who gathered palmetto, cocoplum and seagrape berries. They also fished the Indian River, called the Rio de Ais by Spanish explorers. By 1760, however, the tribe had disappeared due to slave raids, disease and rum. The United States acquired Florida from Spain in 1821. The Seminole Wars delayed settlement.

The community was originally called Sand Point, and a post office was established in 1859, although it closed a few months later. Henry T. Titus arrived in 1867 with the intention to build a town on land owned by his wife, Mary Hopkins Titus, daughter of a prominent planter from Darien, Georgia. He laid out roads and in 1870 erected the Titus House, a large one-story hotel next to a saloon. He also donated land for four churches and a courthouse, the latter an effort to get the town designated as county seat.

Titusville could have been called Riceville, but Titus challenged Capt. Clark Rice to a game of dominoes to decide the name. Titus won the game, and Sand Point became Titusville in 1873. The city was incorporated in 1887, the year construction began on St. Gabriel's Episcopal Church, as listed in the 1972 National Register of Historic Places. At one point, Titusville was nicknamed "The City of Churches". 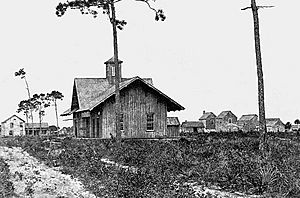 The Atlantic Coast, St. Johns & Indian River Railroad arrived in 1885 from Enterprise, which was connected by a spur line to the Jacksonville, Tampa & Key West Railroad at Enterprise Junction in present-day DeBary. Henry Flagler extended his Florida East Coast Railroad south from Daytona, with the station built in Titusville in 1892. Tourists arrived, and the Indian River area increasingly became an agricultural and shipping center for pineapple and citrus produce. A wooden bridge was built east to Playalinda Beach in 1922.

Beginning in the late 1950s, the growth of Cape Canaveral, and later the Kennedy Space Center on Merritt Island, made the community's economy, population and tourism grow considerably. The association with the space program led to the city's two nicknames in the 1960s: Space City USA and Miracle City.

The jail at the county courthouse became overcrowded by the 1980s. Jailbreaks were common. These ceased when a new jailhouse was built in Sharpes, and the prisoners moved there in 1986.

Computer Shopper was founded in Titusville in 1979 by Glenn Patch, first as a tabloid, but later growing to a magazine of over 800 pages. It was published in Titusville until September 1989, when operations were moved to New York City in a joint venture between Patch Communications of Titusville and Ziff Davis.

In January 2013, Miracle City Mall closed, a victim of a declining local economy after the termination of the Space Shuttle in 2012, the shift of the population center of the county to the south, and changing shopping habits. Demolition of Miracle City Mall occurred February 2015 for the construction of a mixed-use outdoor shopping complex called Miracle City Towne Centre.

The USPS had closed two post offices by 2013, for lack of sufficient business, and was looking to close a third one.

Titusville has as the rest of central Florida a very warm humid subtropical climate with significant influence from the tropics, although the cooler winter lows than farther south separates it from the classification. 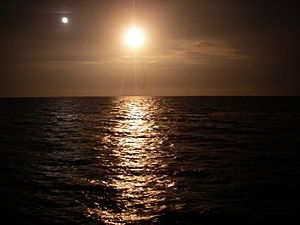 In 2010, a New York Times reporter, in Titusville to cover a space shuttle launch, commented that Titusville was

...a small, sleepy and, some might say, seedy town with a handful of not too luxurious motels and hotels that jack up their prices whenever there is a scheduled shuttle lift-off.

A Titusville spokesman replied that it was common everywhere to increase room rates for major events.

All content from Kiddle encyclopedia articles (including the article images and facts) can be freely used under Attribution-ShareAlike license, unless stated otherwise. Cite this article:
Titusville, Florida Facts for Kids. Kiddle Encyclopedia.