The Space Shuttle was a spacecraft which was used by the American National Aeronautics and Space Administration, or NASA. Space Shuttles were used to carry astronauts and cargo into space. Cargo such as satellites, parts of a space station or scientific instruments were taken up into space by the space shuttle. It was a new kind of spacecraft because it could be used again and again.

Parts of the Space Shuttle 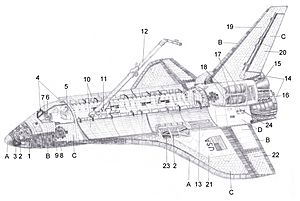 The Space Shuttle was made up of 3 parts. These were the orbiter, the external fuel tank and solid rocket boosters.

The orbiter was shaped like a large airplane with wings and a tail. This allowed the Space Shuttle to glide and land on a runway. This allowed the reusable part of the Shuttle to be very large. Many spacecraft which came before the Space Shuttle, like the Mercury, Gemini and Apollo used parachutes when landing, and landed on the ocean. People have said that the Shuttle was very much like a pickup truck because of its usefulness.

The shuttle was launched out of Earth's gravity and into space by 3 rocket engines on the back of the orbiter along with help from 2 long white Solid Rocket Boosters (also called SRBs) Fuel for the shuttle was stored in the large, usually orange, External Fuel Tank (also called ET). Before the shuttle reached orbit, the SRBs were released and fell into the Atlantic Ocean where they were towed back to shore for reuse. The ET was also released but broke up and fell into the Indian Ocean and was not reused.

Orbiter had a payload bay for various missions rather than deploying satellites. They were the following:

The US space shuttles were:

A '†' next to a name means that the Shuttle was destroyed.

There was a Russian Shuttle called Buran. It flew one unmanned flight before being retired. The Buran was destroyed in a hangar collapse in 2002.

On January 28, 1986 the Space Shuttle Challenger destroyed 73 seconds into the flight of STS-51-L. It caused a year long stall in space flight.

In the 1990s the Shuttle began working on the International Space Station (ISS). This was its main job of the shuttle since then.

Also in the 1990s, the Space Shuttle launched the Hubble telescope into space. Shuttle missions returned 5 times to repair and improve cameras and scientific instruments on the telescope.

On February 1, 2003, the Space Shuttle Columbia broke up while returning STS-107 to Earth over Texas. The accident was caused by damage to the heat-shield which protects it from the heat of reentry into the Earth's atmosphere. It again caused a long delay until the next shuttle flight.

In 2010, NASA shut down the Space Shuttle program. They were more expensive to use than other launch vehicles.

Currently, the United States has no manned spacecraft capabilities. Both SpaceX with the Crew Dragon and Boeing with their Starliner capsule, are planning to provide crewed missions to the ISS. NASA is developing the Orion capsule for beyond Earth orbit missions.

The remaining shuttles are now on display at the following museums:

All content from Kiddle encyclopedia articles (including the article images and facts) can be freely used under Attribution-ShareAlike license, unless stated otherwise. Cite this article:
Space Shuttle Facts for Kids. Kiddle Encyclopedia.