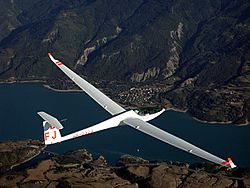 Gliders are aircrafts which do not have a motor. Gliders are controlled by their pilots by using control-sticks. Some gliders can only carry one person; others can carry two. In gliders with two seats, each pilot has a control-stick. Gliders always have seats for the pilots.

'Sailplanes' are gliders with long wings so that they will only lose height slowly. In some places a vertical draft makes the air go up faster than the glider is going down. The pilot of a glider can make it climb by flying to these places. This is called soaring. Good pilots can travel long distances by always finding rising air. Some pilots race each other over hundreds of kilometres each day. Other pilots just fly for fun. 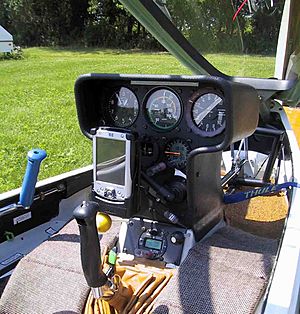 The pilot's seat and controls

All content from Kiddle encyclopedia articles (including the article images and facts) can be freely used under Attribution-ShareAlike license, unless stated otherwise. Cite this article:
Glider Facts for Kids. Kiddle Encyclopedia.