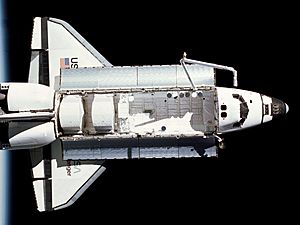 Space Shuttle Challenger (OV-099) was the second space shuttle used by NASA to fly into outer space. The shuttle broke up 73 seconds after take-off from Cape Canaveral on 28 January 1986. All seven astronauts who were on it at the time were killed. The crash happened because a rubber tube called an o-ring did not expand to fill a gap in one of the booster rockets, due to cold weather.

The Challenger was named after a Royal Navy ship which explored the Pacific and Atlantic Oceans from 1872 to 1876. Challenger was also the name of the Apollo 17 Lunar Excursion Module. 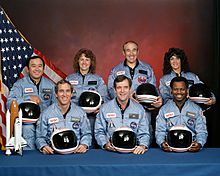 All content from Kiddle encyclopedia articles (including the article images and facts) can be freely used under Attribution-ShareAlike license, unless stated otherwise. Cite this article:
Space Shuttle Challenger Facts for Kids. Kiddle Encyclopedia.