Sally Kristen Ride (May 26, 1951 – July 23, 2012) was an American astronaut and physicist. Born in Los Angeles, she joined NASA in 1978, and in 1983 became the first American woman in space. She was the third woman in space overall, after USSR cosmonauts Valentina Tereshkova (1963) and Svetlana Savitskaya (1982). Ride remains the youngest American astronaut to have traveled to space, having done so at the age of 32. After flying twice on the Orbiter Challenger, she left NASA in 1987.

Ride worked for two years at Stanford University's Center for International Security and Arms Control, then at the University of California, San Diego as a professor of physics, primarily researching nonlinear optics and Thomson scattering. She served on the committees that investigated the Challenger and Columbia Space Shuttle disasters, the only person to participate in both. Having been married to astronaut Steven Hawley during her spaceflight years and in a private, long-term relationship with former Women's Tennis Association player Tam O'Shaughnessy in her years after, she is the earliest space traveler to have been recognized as LGBT. Ride died of pancreatic cancer on July 23, 2012.

The elder child of Dale Burdell Ride and Carol Joyce Ride (née Anderson), Ride was born in Los Angeles. She had one sibling, Karen "Bear" Ride, who is a Presbyterian minister. Both parents were elders in the Presbyterian Church. Ride's mother, who was of Norwegian descent, had worked as a volunteer counselor at a women's correctional facility. Her father had been a political science professor at Santa Monica College.

Ride attended Portola Junior High (now Portola Middle School) and then Birmingham High School before graduating from the private Westlake School for Girls in Los Angeles on a scholarship. In addition to being interested in science, she was a nationally ranked tennis player. She even took a break from college to try and pursue a professional tennis career. Ride attended Swarthmore College for three semesters, took physics courses at University of California, Los Angeles, and then entered Stanford University as a junior, graduating with a bachelor's degree in English and physics. At Stanford, she earned a master's degree in 1975 and a PhD in physics in 1978 while doing research on the interaction of X-rays with the interstellar medium. Astrophysics and free electron lasers were her specific areas of study. 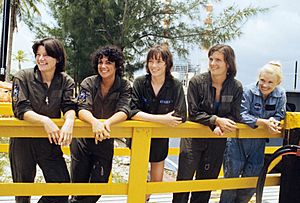 Ride was selected to be an astronaut as part of NASA Astronaut Group 8, in 1978, the first class to select women. She applied after seeing an advertisement in the Stanford student newspaper, and was one of only 35 people selected out of the 8000 applications. After graduating training in 1979, becoming eligible to work as a mission specialist she served as the ground-based capsule communicator (CapCom) for the second and third Space Shuttle flights, and helped develop the Space Shuttle's "Canadarm" robot arm.

Prior to her first space flight, she was subject to media attention due to her gender. During a press conference, she was asked questions such as, "Will the flight affect your reproductive organs?" and "Do you weep when things go wrong on the job?" Despite this and the historical significance of the mission, Ride insisted that she saw herself in only one way—as an astronaut. 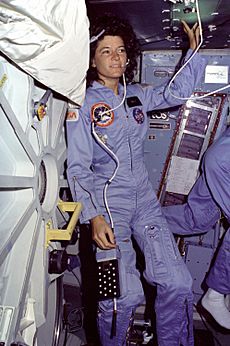 On June 18, 1983, she became the first American woman in space as a crew member on Space Shuttle Challenger for STS-7. Many of the people attending the launch wore T-shirts bearing the words "Ride, Sally Ride", lyrics from Wilson Pickett's song "Mustang Sally". The purpose of the mission was to deploy two communications satellites and the first Shuttle Pallet Satellite (SPAS-1), conduct experiments within the cargo bay, and test the TDRS satellite. SPAS-1 was successfully deployed, underwent experiments, then recollected and brought back to Earth.

Part of Ride's job was to operate the robotics arm to deploy and retrieve SPAS-1.

Her second space flight was STS-41-G in 1984, also on board Challenger. She spent a total of more than 343 hours in space.

Ride had completed eight months of training for her third flight (STS-61-M, a TDRS deployment mission) when the Space Shuttle Challenger disaster occurred.

She was named to the Rogers Commission (the presidential commission investigating the Challenger disaster) and headed its subcommittee on operations. She was the only person to serve on both of the panels investigating Shuttle accidents (those for the Challenger accident and later the Columbia disaster). Following the Challenger investigation, Ride was assigned to NASA headquarters in Washington, D.C., where she led NASA's first strategic planning effort, authored a report titled "NASA Leadership and America's Future in Space" and founded NASA's Office of Exploration. After Sally Ride's death in 2012, General Donald Kutyna revealed that she had discreetly provided him with key information about O-rings (namely, that they become stiff at low temperatures) that eventually led to identification of the cause of the explosion.

In 1987, Ride left her position in Washington, D.C., to work at the Stanford University Center for International Security and Arms Control. In 1989, she became a professor of physics at the University of California, San Diego, and director of the California Space Institute. From the mid-1990s until her death, Ride led two public-outreach programs for NASA—the ISS EarthKAM and GRAIL MoonKAM projects, in cooperation with NASA's Jet Propulsion Laboratory and UCSD. The programs allowed middle school students to request images of the Earth and Moon. In 1999, she acted in the season 5 finale of Touched by an Angel, titled "Godspeed". In 2003, she was asked to serve on the Columbia Accident Investigation Board. She was the president and CEO of Sally Ride Science, a company she co-founded in 2001 that creates entertaining science programs and publications for upper elementary and middle school students, with a particular focus on girls.

According to Roger Boisjoly, who was one of the engineers that warned of the technical problems that led to the Challenger disaster, after the entire workforce of Morton-Thiokol shunned him, Ride was the only public figure to show support for him when he went public with his pre-disaster warnings. Sally Ride hugged him publicly to show her support for his efforts. 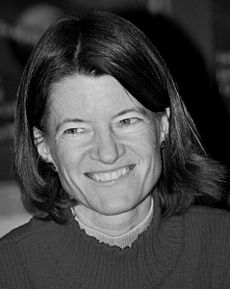 Ride wrote or co-wrote seven books on space aimed at children, with the goal of encouraging children to study science.

Ride endorsed Barack Obama for U.S. President in 2008. She was a member of the Review of United States Human Space Flight Plans Committee, an independent review requested by the Office of Science and Technology Policy (OSTP) on May 7, 2009.

Ride was extremely private about her personal life. In 1982, she married fellow NASA astronaut Steve Hawley. They divorced in 1987.

After Ride's death, her obituary revealed that her partner of 27 years was Tam O'Shaughnessy, a professor emerita of school psychology at San Diego State University and childhood friend, who met her when both were aspiring tennis players. O'Shaughnessy was also a science writer and, later, the co-founder of Sally Ride Science. O'Shaughnessy served as the Chief Executive Officer and Chair of the Board of Sally Ride Science. They wrote six acclaimed children's science books together. Their relationship was revealed by the company and confirmed by her sister, who said she chose to keep her personal life private, including her sickness and treatments. This made Ride the first LGBT astronaut in outer space.

Ride died on July 23, 2012, at the age of 61, in her home in La Jolla, California, seventeen months after being diagnosed with pancreatic cancer. Following cremation, her ashes were interred next to her father at Woodlawn Memorial Cemetery, Santa Monica.

Ride received numerous awards throughout her lifetime and after. She received the National Space Society's von Braun Award, the Lindbergh Eagle, and the NCAA's Theodore Roosevelt Award. She was inducted into the National Women's Hall of Fame and the Astronaut Hall of Fame and was awarded the NASA Space Flight Medal twice. Two elementary schools in the United States are named after her: Sally Ride Elementary School in The Woodlands, Texas, and Sally Ride Elementary School in Germantown, Maryland.

In 1994, Ride received the Samuel S. Beard Award for Greatest Public Service by an Individual 35 Years or Under, an award given out annually by Jefferson Awards.

On December 6, 2006, California Governor Arnold Schwarzenegger and First Lady Maria Shriver inducted Ride into the California Hall of Fame at the California Museum for History, Women, and the Arts.

In 2007, she was inducted into the National Aviation Hall of Fame in Dayton, Ohio.

Ride directed public outreach and educational programs for NASA's GRAIL mission, which sent twin satellites to map the moon's gravity. On December 17, 2012, the two GRAIL probes, Ebb and Flow, were directed to complete their mission by crashing on an unnamed lunar mountain near the crater Goldschmidt. NASA announced that it was naming the landing site in honor of Sally Ride. Also in December 2012, the Space Foundation bestowed upon Ride its highest honor, the General James E. Hill Lifetime Space Achievement Award.

In April 2013, the U.S. Navy announced that a research ship would be named in honor of Ride. This was done in 2014 with the christening of the oceanographic research vessel RV Sally Ride (AGOR-28).

On May 20, 2013, a "National Tribute to Sally Ride" was held at the John F. Kennedy Center for the Performing Arts in Washington, D.C. and on that same day, President Barack Obama announced that Ride would receive the Presidential Medal of Freedom, the highest civilian award in the United States. The medal was presented to her life partner Tam O'Shaughnessy in a ceremony at the White House on November 20, 2013. In July 2013, Flying magazine ranked Ride at number 50 on their list of the "51 Heroes of Aviation".

In 2014, Ride was inducted into the Legacy Walk, an outdoor public display that celebrates LGBT history and people.

In 2017, a Google Doodle honored her on International Women's Day.

In 2019 Stanford University’s Serra House located in Lucie Stern Hall was renamed the Sally Ride House. It was formerly named after Junípero Serra.

For their first match of March 2019, the women of the United States women's national soccer team each wore a jersey with the name of a woman they were honoring on the back; Tierna Davidson chose the name of Sally Ride.

When she became the first American woman in space on the Space Shuttle Challenger, many in the crowd attending the launch wore T-shirts printed, "Ride, Sally Ride", a play on the lyric of the 1965 song "Mustang Sally".

In 1999, Ride appeared as herself on the Touched By An Angel episode "Godspeed".

Also in 2013, astronauts Chris Hadfield and Catherine Coleman performed a song called "Ride On". The song was later released as part of Hadfield's album Space Sessions: Songs from a Tin Can under the name Ride That Lightning.

Ride's space flight is a central event in the 2016 novel Our Lady of the Inferno.

In 2017, a "Women of NASA" LEGO set went on sale featuring (among other things) mini-figurines of Ride, Margaret Hamilton, Mae Jemison, and Nancy Grace Roman.

In 2019, Mattel released a Barbie doll in Ride's likeness as part of their "Inspiring Women" series.

In the 2020 movie Valley Girl, she is referred to as the first woman astronaut and a valley girl, since she was from Encino.

All content from Kiddle encyclopedia articles (including the article images and facts) can be freely used under Attribution-ShareAlike license, unless stated otherwise. Cite this article:
Sally Ride Facts for Kids. Kiddle Encyclopedia.