The first ever Google Doodle celebrating, which was used on August 30, 1998.

A Google Doodle is a special, temporary alteration of the logo on Google's homepages that commemorates holidays, events, achievements, and people. The first Google Doodle honored the Burning Man festival in 1998, and was designed by Larry Page and Sergey Brin to notify users of their absence in case the servers crashed. Subsequent Google Doodles were designed by an outside contractor until 2000, when Page and Brin asked public relations officer Dennis Hwang to design a logo for Bastille Day. Since then, a team of employees called Doodlers have organized and published the Doodles.

Initially, Doodles were neither animated nor hyperlinked—they were simply images with hovertext describing the subject or expressing a holiday greeting. Doodles increased in both frequency and complexity by the beginning of the 2010s. In January 2010 the first animated Doodle honored Sir Isaac Newton. The first interactive Doodle appeared shortly thereafter celebrating Pac-Man, and hyperlinks also began to be added to Doodles, usually linking to a search results page for the subject of the Doodle. By 2014, Google had published over 2,000 regional and international Doodles throughout its homepages, often featuring guest artists, musicians, and personalities. 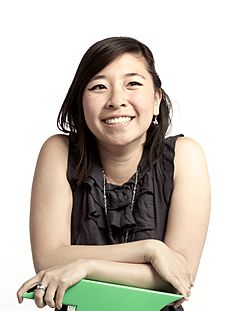 In May 2010, on the 30th anniversary of the arcade game Pac-Man, Google unveiled worldwide their first interactive logo, created in association with Namco. Anyone who visited Google could play Pac-Man on the logo, which featured the letters of the word "Google" on the Pac-Man maze. The logo also mimicked the sounds the original arcade game made. The "I'm Feeling Lucky" button was replaced with an "Insert Coin" button. Pressing this once enabled you to play the Pac-Man logo. Pressing it once more added a second player, Ms. Pac-Man, enabling two players to play at once, controlled using the W, A, S, D keys, instead of the arrows as used by Player 1. Pressing it for a third time performed an "I'm Feeling Lucky" search. It was then removed on May 23, 2010, initially replacing Pac-Man with the normal logo. Later on that day, Google released a permanent Google Pac-Man site, due to the popular user demand for the playable logo.

Since Google first celebrated the Thanksgiving holiday with a Doodle in 1998, many Doodles for holidays, events, and other celebrations have recurred on an annual basis, including the following: 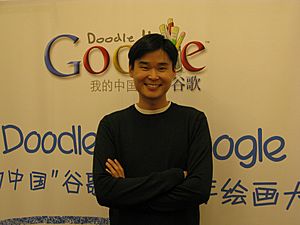 The competition originated in the United Kingdom, and has since expanded to the United States and other countries. The competition was also held in Ireland in 2008. Google announced a Doodle 4 Google competition for India in 2009 and the winning doodle was displayed on the Google India homepage on November 14. A similar competition held in Singapore based on the theme "Our Singapore" was launched in January 2010 and the winning entry was chosen from over 30,000 entries received. The winning design will be shown on Singapore's National Day on Google Singapore's homepage. It was held again in 2015 in Singapore and was themed 'Singapore: The next 50 years'.

All content from Kiddle encyclopedia articles (including the article images and facts) can be freely used under Attribution-ShareAlike license, unless stated otherwise. Cite this article:
Google Doodle Facts for Kids. Kiddle Encyclopedia.