Martin Luther King Jr. Day is a US Federal Holiday. It commemorates civil rights activist Martin Luther King, Jr.'s birthday. It is celebrated on the third Monday in January and is one of only four United States Federal holidays to honor an individual person.

President Ronald Reagan signed a bill, proposed by Representative Katie Hall of Indiana, to create a federal holiday honoring King. The holiday was observed for the first time on January 20, 1986. It is observed on the third Monday of January. 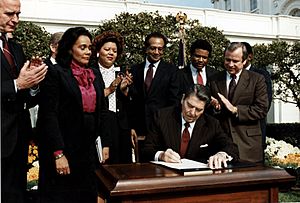 All content from Kiddle encyclopedia articles (including the article images and facts) can be freely used under Attribution-ShareAlike license, unless stated otherwise. Cite this article:
Martin Luther King Jr. Day Facts for Kids. Kiddle Encyclopedia.