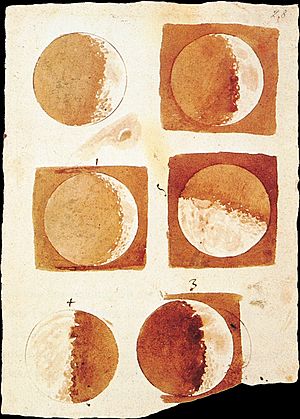 Galileo's 1616 drawings of the Moon and its phases. Monday is named after the Moon in many languages.

In Judaism Mondays are considered auspicious days for fasting. The Didache warned early Christians not to fast on Mondays to avoid Judaizing, and suggests Wednesdays instead.

In Judaism the Torah is read in public on Monday mornings, one of three days the Torah is read each week (the other two days being Thursday and Saturday). Special penitential prayers are recited on Monday, unless there is a special occasion for happiness which cancels them.

In the Eastern Orthodox Church Mondays are days on which the Angels are commemorated. The Octoechos contains hymns on this theme, arranged in an eight-week cycle, that are chanted on Mondays throughout the year. At the end of Divine Services on Monday, the dismissal begins with the words: "May Christ our True God, through the intercessions of his most-pure Mother, of the honorable, Bodiless Powers (i.e., the angels) of Heaven…". In many Eastern monasteries Mondays are observed as fast days; because Mondays are dedicated to the angels, and monks strive to live an angelic life. In these monasteries the monks abstain from meat, fowl, dairy products, fish, wine and oil (if a feast day occurs on a Monday, fish, wine and oil may be allowed, depending upon the particular feast).

The Church of Jesus Christ of Latter-day Saints spend one evening per week called Family Home Evening (FHE) or Family Night usually Monday, that families are encouraged to spend together in study, prayer and other family activities. Many businesses owned by Latter-Day Saints close early on Mondays so they and their customers are able to spend more time with their families.

All content from Kiddle encyclopedia articles (including the article images and facts) can be freely used under Attribution-ShareAlike license, unless stated otherwise. Cite this article:
Monday Facts for Kids. Kiddle Encyclopedia.