Bastille Day is the common name given in English-speaking countries to the national day of France, which is celebrated on 14 July each year. In French, it is formally called Fête nationale.

The French National Day is the anniversary of Storming of the Bastille on 14 July 1789, a turning point of the French Revolution, as well as the Fête de la Fédération that celebrated the unity of the French people on 14 July 1790. Celebrations are held throughout France. One that has been reported as "the oldest and largest military parade in Europe" is held on 14 July on the Champs-Élysées in Paris in front of the President of the Republic, along with other French officials and foreign guests.

Events and traditions of the day

The Bastille Day Military Parade opens with cadets from the École polytechnique, Saint-Cyr, École Navale, and so forth, then other infantry troops, then motorized troops; aircraft of the Patrouille de France aerobatics team fly above. In recent times, it has become customary to invite units from France's allies to the parade; in 2004 during the centenary of the Entente Cordiale, British troops (the band of the Royal Marines, the Household flying overhead. In 2007 the German 26th Airborne Brigade led the march followed by British Royal Marines. In 2013, Malian soldiers opened the parade, following the Franco-Malian military Operation Serval. Members of the United Nations' MINUSMA forces also took part in the parade, including soldiers from twelve other African countries, notably Chad. United Nations Secretary General Ban Ki-moon attended the parade alongside French President François Hollande.

Storming of the Bastille

Main page: Storming of the Bastille

On May 19, 1789, Louis XVI convened the Estates-General to hear their grievances. The deputies of the Third Estate representing the common people (the two others were the Catholic Church and nobility) decided to break away and form a National Assembly. On June 20 the deputies of the Third Estate took the Tennis Court Oath, swearing not to separate until a constitution had been established. They were gradually joined by delegates of the other estates; Louis XVI started to recognize their validity on 27 June. The assembly renamed itself the National Constituent Assembly on 9 July, and began to function as a legislature and to draft a constitution.

In the wake of the July 11th dismissal of Jacques Necker, the people of Paris, fearful that they and their representatives would be attacked by the royal military, and seeking to gain ammunition and gunpowder for the general populace, stormed the Bastille, a fortress-prison in Paris which had often held people jailed on the basis of lettres de cachet, arbitrary royal indictments that could not be appealed. Besides holding a large cache of ammunition and gunpowder, the Bastille had been known for holding political prisoners whose writings had displeased the royal government, and was thus a symbol of the absolutism of the monarchy. As it happened, at the time of the siege in July 1789 there were only seven inmates, none of great political significance.

When the crowd—eventually reinforced by mutinous gardes françaises—proved a fair match for the fort's defenders, Governor de Launay, the commander of the Bastille, capitulated and opened the gates to avoid a mutual massacre. However, possibly because of a misunderstanding, fighting resumed. Ninety-eight attackers and just one defender died in the actual fighting, but in the aftermath, de Launay and seven other defenders were killed, as was the 'prévôt des marchands' (roughly, mayor) Jacques de Flesselles.

Shortly after the storming of the Bastille, on 4 August feudalism was abolished and on 26 August, the Declaration of the Rights of Man and of the Citizen was proclaimed. 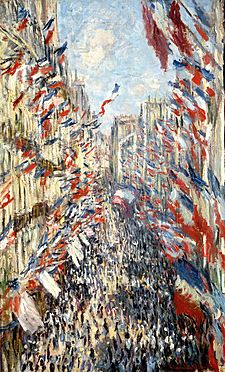 The Fête de la Fédération on the 14 July 1790 was a huge feast and official event to celebrate the uprising of the short-lived constitutional monarchy in France and what people considered the happy conclusion of the French Revolution. The event took place on the Champ de Mars, which was at the time far outside Paris. The place had been transformed on a voluntary basis by the population of Paris itself, in what was recalled as the Journée des brouettes ("Wheelbarrow Day").

A mass was celebrated by Talleyrand, bishop of Autun. The popular General Lafayette, as captain of the National Guard of Paris and confidant of the king, took his oath to the constitution, followed by King Louis XVI. After the end of the official celebration, the day ended in a huge four-day popular feast and people celebrated with fireworks, as well as fine wine and running through the streets in order to display their great freedom.

Origin of the present celebration

On 30 June 1878, a feast had been arranged in Paris by official decision to honour the French Republic (the event was commemorated in a painting by Claude Monet). On 14 July 1879, another feast took place, with a semi-official aspect; the events of the day included a reception in the Chamber of Deputies, organised and presided over by Léon Gambetta, a military review in Longchamp, and a Republican Feast in the Pré Catelan. All through France, Le Figaro wrote, "people feasted much to honour the storming of the Bastille".

On 21 May 1880, Benjamin Raspail proposed a law to have "the Republic choose the 14 July as a yearly national holiday". The Assembly voted in favour of the proposal on 21 May and 8 June. The Senate approved on it 27 and 29 June, favouring 14 July against 4 August (honouring the end of the feudal system on 4 August 1789). The law was made official on 6 July 1880, and the Ministry of the Interior recommended to Prefects that the day should be "celebrated with all the brilliance that the local resources allow". Indeed, the celebrations of the new holiday in 1880 were particularly magnificent.

The Bastille Day Military Parade is the French military parade that has been held on the morning of 14 July each year in Paris since 1880. While previously held elsewhere within or near the capital city, since 1918 it has been held on the Champs-Élysées, with the evident agreement of the Allies as represented in the Versailles Peace Conference, and with the exception of the period of German occupation from 1940 to 1944. The parade passes down the Champs-Élysées from the Arc de Triomphe to the Place de la Concorde, where the President of the French Republic, his government and foreign ambassadors to France stand. This is a popular event in France, broadcast on French TV, and is the oldest and largest regular military parade in Europe. In some years, invited detachments of foreign troops take part in the parade and foreign statesmen attend as guests.

Smaller military parades are held in French garrison towns, including Toulon and Belfort, with local troops.

Bastille Day celebrations in other countries 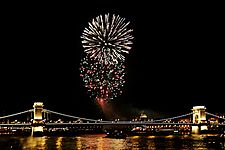 The French Consulate in Cape Town also celebrate by throwing an official party for the French Community and local officials. 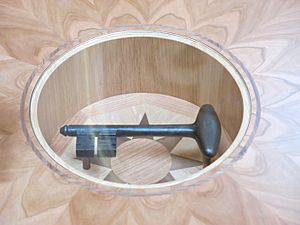 All content from Kiddle encyclopedia articles (including the article images and facts) can be freely used under Attribution-ShareAlike license, unless stated otherwise. Cite this article:
Bastille Day Facts for Kids. Kiddle Encyclopedia.