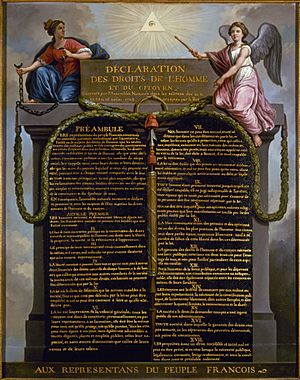 Declaration of the Rights of Man and of the Citizen. It uses the style of the Ten Commandments.

The Declaration of the Rights of Man and of the Citizen (French: La Déclaration des droits de l'Homme et du citoyen) is one of the most important papers of the French Revolution. This paper explains a list of rights, such as freedom of religion, freedom of speech, freedom of assembly and separation of powers. All men have these rights. It also talks about some rights many people have together. This paper was written using some of the ideas of natural rights, these rights are for all men: they are supposed to be valid in all times and places. They are said to be rights of human nature. The last idea of the Declaration was accepted on 26 August 1789, by the National Constituent Assembly (Assemblée nationale constituante).. It was a very important first thing to do before the people could write a constitution. The paper explained these basic rights, not only for French people but for all men without exception, it did not say anything about the rights or role of women. It also did not talk about slavery. People now think that it was an important step towards international human rights or Universal Declaration of Human Rights:

"First Article – Men are born and remain free and equal in rights. Social distinctions can be founded only on the common utility."

The ideas written in the declaration are important in French law today. They can be used to fight or change new laws or other government actions. French law is based off of this document.

All content from Kiddle encyclopedia articles (including the article images and facts) can be freely used under Attribution-ShareAlike license, unless stated otherwise. Cite this article:
Declaration of the Rights of Man and of the Citizen Facts for Kids. Kiddle Encyclopedia.