Freedom of assembly facts for kids 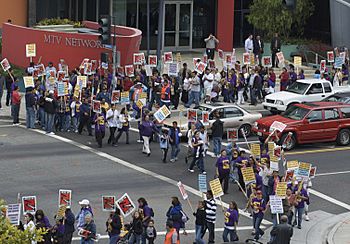 Cleaners striking in front of the MTV building in Santa Monica, California. Striking in a trade union is a way of exercising freedom of assembly and freedom of association

Freedom of assembly and freedom of association, is the right to join together with others peacefully to reach common goals and express common opinions, both in public and in private. This usually includes business groups (or corporation), civic organizations, labor unions, political parties, and protest groups.

Freedom of assemble does not mean that any group can come together for any purpose. Some governments prohibit militias, or groups of people outside the military that gather weapons and train soldiers, from demonstrating in public with their weapons to cause violence and a disturbance.

Many developed nations protect the freedom of assembly. Many have passed laws or constitutional amendments ensuring that people will be able to freely assemble. These include:

All content from Kiddle encyclopedia articles (including the article images and facts) can be freely used under Attribution-ShareAlike license, unless stated otherwise. Cite this article:
Freedom of assembly Facts for Kids. Kiddle Encyclopedia.