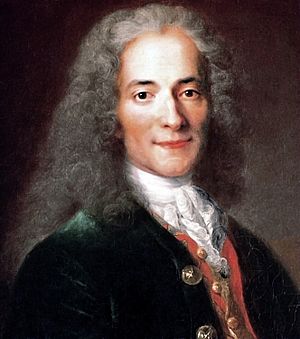 François-Marie Arouet (also known as Voltaire) was a French philosopher. He was born in 1694 and grew up in Poitou. He died in Paris in 1778.

Voltaire did not like France at the time because he thought that it was old fashioned. He also did not like the Church and thought that people should be allowed to believe what they want. However he did not like democracy either and thought that a country needed to be led by a wise and strong king. Voltaire had to live in exile in England for three years from 1726 to 1729 where these ideas were more common. He liked the philosophy of John Locke.

Voltaire was also a writer. He wrote many books, poems and plays, some of which are still liked today. A lot of his work was against France and the Church. This meant that he was unpopular at first but became more popular towards the time of the French Revolution. When he died at age 83, Voltaire was a hero of French people. He also studied science and wrote a lot about people and places he knew.

All content from Kiddle encyclopedia articles (including the article images and facts) can be freely used under Attribution-ShareAlike license, unless stated otherwise. Cite this article:
Voltaire Facts for Kids. Kiddle Encyclopedia.