Adam and Eve facts for kids 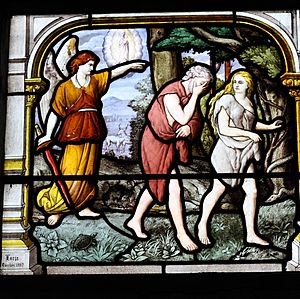 Adam and Eve are figures that appear in the Abrahamic religions. In the Book of Genesis in the Bible, as well as the Qu'ran and the Aqdas, they are the first two people made by God.

The second chapter of Genesis says that God made Adam from the dust of the ground. Then, God breathed life into him. God made a garden, called the Garden of Eden, for him to live in and take care of. Adam named the animals that God made.

God knew that the animals were not good enough friends for Adam, who needed a partner like him. So God made Eve (meaning "life") from a rib of Adam's.

The fall and punishment

Chapter three of Genesis says that Adam and Eve had everything they needed in the garden. There was only one thing that God told them that they should not do: eat from the Tree of Knowledge; only from the Tree of Life. However, they disobeyed God's orders and ate the Forbidden fruit. So they were forced to leave the garden. Not only that but God said that women will have pain in childbirth, and that man will have to work hard to grow food, and would return at death to the soil from where he once came.

All content from Kiddle encyclopedia articles (including the article images and facts) can be freely used under Attribution-ShareAlike license, unless stated otherwise. Cite this article:
Adam and Eve Facts for Kids. Kiddle Encyclopedia.