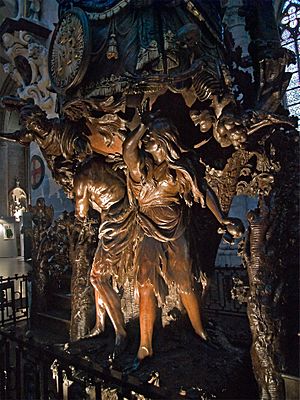 Adam and Eve fell from the Garden of Eden. Eve still holds the forbidden fruit in her hand.

The words Forbidden fruit stand as a metaphor (an image). The metaphor comes from the book of Genesis in the Bible. There Adam and Eve are thrown out of Paradise because they eat from the tree of knowledge.

Most often, people thought the fruit was an apple. This is a wordplay of Latin language word for apple, malus, which can mean both "evil" and "apple". The Bible does not say what kind the fruit is. In Judaism the fruit is believed to be either a grape, a fig, a citron or wheat. Most scholars say that the type of fruit is not forbidden, it was just the fruits of that particular tree that were.

All content from Kiddle encyclopedia articles (including the article images and facts) can be freely used under Attribution-ShareAlike license, unless stated otherwise. Cite this article:
Forbidden fruit Facts for Kids. Kiddle Encyclopedia.