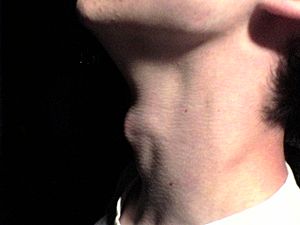 The Adam's apple is a feature of the human neck. The medical name in English for it is the laryngeal prominence. This lump is formed by the angle of the thyroid cartilage (a type of soft bone) around the larynx (part of the throat which holds the vocal chords).

The adam's apple can usually be seen better in adult men than in women, girls, or boys. The adam's apple is only part of the thyroid cartilage around the larynx. A large adam's apple is commonly seen as a male secondary sex characteristic, although not all males have it and quite a few women have one too.

It is called "Adam's apple" as a reference to the forbidden fruit, which according to a traditional Jewish belief, got stuck in Adam's throat. Different languages use the same term, for instance Adamsappel (Dutch), pomme d'Adam (French) and Adamsapfel (German). Until the 19th century, the medical term was also generally Pomum Adami. When the Basle Nomina Anatomica was introduced in 1895, it became Prominentia laryngea.

All content from Kiddle encyclopedia articles (including the article images and facts) can be freely used under Attribution-ShareAlike license, unless stated otherwise. Cite this article:
Adam's apple Facts for Kids. Kiddle Encyclopedia.