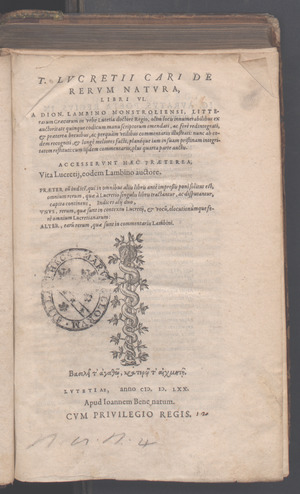 Titus Lucretius Carus (ca. 98 BC – ca. 55 BC) was a Roman poet and philosopher. He is known for De rerum natura (in English:"On the Nature of the Universe"). It is an epic philosophical work about the beliefs of Epicureanism.

There are not any details about his life. Saint Jerome tells of how he became insane because of a love potion and wrote his poetry in between fits of insanity. Modern scholarship thinks this was just used to explain how he behaved. The De rerum natura had a large affect on the Augustan poets, including Virgil and Horace. The work were lost for a time. It was later found in a monastery in Germany. This work played an important part both in the development of atomism and in the efforts of many people of the Enlightenment era to build a new Christian humanism.

All content from Kiddle encyclopedia articles (including the article images and facts) can be freely used under Attribution-ShareAlike license, unless stated otherwise. Cite this article:
Lucretius Facts for Kids. Kiddle Encyclopedia.