The Origin of Species facts for kids 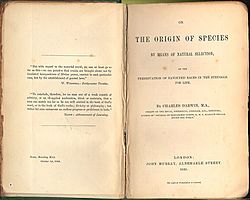 The title page of the 1st edition

On the Origin of Species is the famous book by Charles Darwin. It gave evidence for evolution, and suggested what had caused evolution to happen.

Its full title was On the origin of species by means of natural selection, or the preservation of favoured races in the struggle for life.

It was published in London by John Murray in November 1859. It was translated into many languages, and has been in print ever since. The title since the 6th edition of 1872 has been The Origin of Species. This is the most important single book in the biological sciences, and its main ideas are well-supported by modern research.

What the book did

Darwin's book did two things. First, it provided a great deal of evidence that evolution has taken place. Second, it proposed a theory to explain how evolution works. That theory is natural selection. Evolution by natural selection is the key to understanding biology, and the diversity of life on Earth.

Darwin's ideas on the connection between natural selection and inheritance were unclear, mainly because the process of genetic inheritance was unknown at that time. This was solved in the mid-20th century by the modern evolutionary synthesis, which showed that Gregor Mendel's genetics was compatible with evolution in small steps. Darwin made almost no mention of the evolution of the human race, though most of the controversy raged around this topic. Darwin eventually published The Descent of Man in 1871.

The Origin was a serious blow to all who interpreted the Bible literally. However, even in 1860, there were many Christians who thought some of the Old Testament could not be literally true. Even the early Church Fathers had not interpreted Genesis literally.p323 Today, both the Anglican and Catholic churches hold that evolution is not inconsistent with their beliefs.

The Origin marked a big step in the history of science. Before it, religious leaders often gave their opinions on science; after – though it took time – science increasingly became the business of professional scientists. Darwin's friend Thomas Henry Huxley devoted many years to supporting Darwin, and opposing any interference of religion in science.

Darwin's aims were twofold: to show that species had not been separately created, and to show that natural selection had been the chief agent of change.

Many readers were already familiar with the idea of evolution from a book published anonymously in 1844, Vestiges of the Natural History of Creation (actually by Robert Chambers). In his introduction Darwin ridicules that work as failing to provide a mechanism (a way it could happen).

The first four chapters lay out his case that selection in nature, caused by the struggle for existence, is analogous to the selection of variations under domestication.

Darwin presents supporting facts drawn from many disciplines. The idea was to show that his theory could explain a myriad of observations from many fields of natural history that were inexplicable if species had been individually created.

There were six editions of the Origin during Darwin's life. The second, in 1860, was almost the same as the first. The sixth edition bore the title: The origin of species.

There were many changes in the text in later editions. In the fifth edition of 1869 Darwin used Herbert Spencer's phrase 'survival of the fittest' for the first time, in the heading of chapter 4.

In the sixth and last edition, Darwin uses the word 'evolution' for the first time in this book. There is a new chapter 7 inserted:

The Origin was translated during Darwin's lifetime into Danish, Dutch, French, German, Hungarian, Italian, Polish, Serbian, Spanish and Swedish, and into 18 more languages since. Translations into some languages, such as French and German, were done more than once.

All content from Kiddle encyclopedia articles (including the article images and facts) can be freely used under Attribution-ShareAlike license, unless stated otherwise. Cite this article:
The Origin of Species Facts for Kids. Kiddle Encyclopedia.