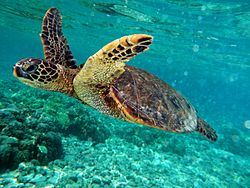 Most of the behaviour of these ancient reptiles is instinctive. Green turtle swimming

Animals with nervous systems are born with instincts. An instinct is a part of the behaviour of an organism. It is inherited (innate), not learned. However, the term does not include the operation of sense organs, and does not include the normal working of the autonomic nervous system. Instincts are to do with visible muscular action in response to releasers. Releasers are triggers which set off chains of instinctive behaviour. Although instincts are not learned, in some cases their performance can be improved by experience and practice.

There are some problems with the term 'instinct'. It can be used loosely to mean a general tendency, such as "a man's instinct is to protect his family". It can be used to describe chains of behaviour of mixed origin. Properly, it is used only of well-defined acts whose causation is inherited, and which are triggered by specific stimuli called releasers.

Other terms for instinct are fixed action patterns (FAP) and innate behaviour chains.

Instinctive behaviours can be variable and responsive to the environment. Any behaviour is instinctive if it is performed without being based upon prior experience, that is, in the absence of learning. Sea turtles, newly hatched on a beach, will automatically move toward the ocean, and automatically swim when they are in the water. A joey climbs into its mother's pouch upon being born. Honeybees communicate by dance the direction of a food source without formal instruction. Other examples include animal fighting, animal courtship behaviour, internal escape functions, and building of nests.

Reflex actions are a special case. A true reflex is distinguished from other behaviours by mechanism; they do not go through the brain. Rather, the stimulus travels to the spinal cord and the message is then transmitted back through the body, tracing a path called the reflex arc. Reflexes are similar to fixed action patterns, but a fixed action pattern can be processed in the brain as well. A male stickleback's instinctive aggression towards anything red during his mating season is such an example. Examples of instinctive behaviours in humans include many of the primitive reflexes, such as rooting and suckling, behaviours which are present in most mammals.

Some instinctive behaviors depend on maturational processes to appear. For instance, we commonly refer to birds "learning" to fly, because they cannot fly at first, but can a week or two later. However, young birds have been experimentally reared in devices that prevent them from moving their wings until they reached the age at which their cohorts were flying. These birds flew immediately and normally when released, showing that their improvement resulted from neuromuscular maturation and not true learning.

While fixed action patterns and reflexes are clear examples of almost entirely instinctive behaviours, most behaviours are complex and consist of both instinctive and learned components. For instance, in imprinting a bird has a sensitive period during which it learns who its mother is. Konrad Lorenz famously had a goose imprint on his boots. Thereafter the goose would follow whomever wore the boots. The identity of the goose's mother was learned, but the goose's behavior towards the boots was instinctive. Similarly, sleeping in humans is instinctive, but how much and when one sleeps is clearly subject to environmental factors. Whether a behaviour is instinctive or learned is common subject of nature versus nurture debates.

In a situation when two instincts contradict each other, an animal may resort to a displacement activity.

Instinct is a built-in need to do something. It's not something an animal thinks about; it's something it does automatically. A baby bird automatically throws its head back, opens its mouth wide, and screams for food. It is an instinct. Baby bats automatically cling to the cave wall. Grasshoppers naturally spit out the things in their stomach on predators that try to eat them. Bees naturally work to take care of the hive and make honey. Butterflies inherit preferences for laying their eggs on certain plants.plant their young need to eat, and that's where they lay their eggs. Animals are born with these instincts, and they follow their instincts without conscious thought.

Organisms have two ways they can get behaviours. One way is learn, by observation, and by repeating things which have a pleasant outcome. The other way is to inherit the behaviour pattern by heredity.

All content from Kiddle encyclopedia articles (including the article images and facts) can be freely used under Attribution-ShareAlike license, unless stated otherwise. Cite this article:
Instinct Facts for Kids. Kiddle Encyclopedia.