Chelonia mydas, commonly known as the green turtle, is a large sea turtle belonging to the family Cheloniidae. It is the only species in its genus. It is one of the seven marine turtles, which are all endangered.

Although it might have some green on its carapace (shell), the green turtle is not green. It gets its name from the fact that its body fat is green. It can grow up to 1 m (3 ft) long and weigh up to 160 kg (353 lb). They are an endangered species, especially in Florida and the Pacific coast of Mexico. They can also be found in warm waters around the world and are found along the coast of 140 countries.

The female turtle lays eggs in nests she builds in the sand on the beaches. She uses the same beach that she was born on. During the nesting season in summer she can make up to five nests. She can lay as many as 135 eggs in a nest. The eggs take about two months to hatch. The baby turtles are about 50 mm (2 in) in length. 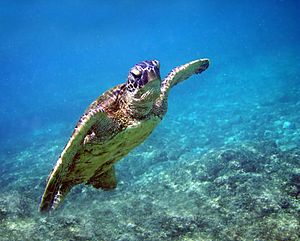 As one of the first sea turtle species studied, much of what is known of sea turtle ecology comes from studies of green turtles. The ecology of C. mydas changes drastically with each stage of its life history. Newly emerged hatchlings are carnivorous, pelagic organisms, part of the open ocean mininekton. In contrast, immature juveniles and adults are commonly found in seagrass meadows closer inshore as herbivorous grazers. 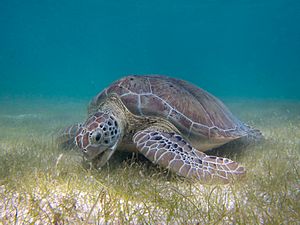 The diet of green turtles changes with age. Juveniles are carnivorous, but as they mature they become omnivorous. The young eat fish eggs, mollusks, jellyfish, small invertebrates, worms, sponges, algae, and crustaceans. Green sea turtles have a relatively slow growth rate because of the low nutritional value of their diet. Body fat turns green because of the consumed vegetation. This diet shift has an effect on the green turtle's skull morphology. Their serrated jaw helps them chew algae and sea grasses. Most adult sea turtles are strictly herbivorous.

Green sea turtles have a variety of parasites including barnacles, leeches, protozoans, cestodes, and nematodes. Barnacles and leeches attach to the carapace and flippers of the turtles, which damage their tissues, shells, and lead to blood loss. Protozoans, cestodes and nematodes lead to many turtle deaths because of the infections in the liver and intestinal tract. The greatest disease threat to the turtle population is fibropapilloma, which produces lethal tumor growth on scales, lungs, stomach, and kidneys. Fibropapilloma is caused by a herpesvirus that is transmitted via leeches. 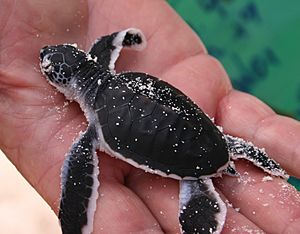 Green sea turtles migrate long distances between feeding sites and nesting sites; some swim more than 2,600 kilometres (1,600 mi) to reach their spawning grounds. Beaches in Southeast Asia, India, islands in the western Pacific, and Central America are where Green sea turtles breed. Mature turtles often return to the exact beach from which they hatched. Females usually mate every two to four years. Males, on the other hand, visit the breeding areas every year, attempting to mate. Mating seasons vary between populations. For most C. mydas in the Caribbean, mating season is from June to September. The French Guiana nesting subpopulation nests from March to June. In the tropics, green turtles nest throughout the year, although some subpopulations prefer particular times of the year. In Pakistan, Indian Ocean turtles nest year-round, but prefer the months of July to December.

Sea turtles return to the beaches on which they were born to lay their own eggs. The reason for returning to native beaches may be that it guarantees the turtles an environment that has the necessary components for their nesting to be successful. These include a sandy beach, easy access for the hatchlings to get to the ocean, the right incubation temperatures, and low probability of predators that may feed on their eggs. Over time these turtles have evolved these tendencies to return to an area that has provided reproductive success for many generations. Their ability to return to their birthplace is known as natal homing. The males also return to their birthplaces in order to mate. These males that return to their homes know they will be able to find mates because the females born there also return to breed. By doing this, the green sea turtles are able to improve their reproductive success and is why they are willing to expend the energy to travel thousands of miles across the ocean in order to reproduce.

Mating behaviour is similar to other marine turtles. Female turtles control the process. A few populations practice polyandry, although this does not seem to benefit hatchlings. After mating in the water, the female moves above the beach's high tide line, where she digs a hole 11-22 inches in depth with her hind flippers and deposits her eggs. The hole is then covered up again. Clutch size ranges between 85 and 200, depending on the age of the female. This process takes about an hour to an hour and a half. After the nest is completely covered, she returns to the sea. The female will do this 3 to 5 times in one season.

The eggs are round and white, and about 45 mm in diameter. The hatchlings remain buried for days until they all emerge together at night. The temperature of the nest determines the sex of the turtles before they hatch. At around 50 to 70 days, the eggs hatch during the night, and the hatchlings instinctively head directly into the water. This is the most dangerous time in a turtle's life. As they walk, predators, such as gulls and crabs, feed on them. A significant percentage never make it to the ocean. Little is known of the initial life history of newly hatched sea turtles. Juveniles spend three to five years in the open ocean before they settle as still-immature juveniles into their permanent shallow-water lifestyle. It is speculated that they take twenty to fifty years to reach sexual maturity. Individuals live up to eighty years in the wild. It is estimated that only 1% of hatchlings reach sexual maturity.

Each year on Ascension Island in the South Atlantic, C. mydas females create 6,000 to 25,000 nests. They are among the largest green turtles in the world; many are more than a metre in length and weigh up to 300 kilograms (660 lb).

The numbers of green turtles around the world has dropped by more than half over the last 150 years. The main reasons are hunting of turtles and the taking of their eggs. Many turtles are killed when they get caught in fishing nets. There is also a disease called fibropapillomatosis which is affecting them. This disease which causes tumors to grow on the turtle's face is probably caused by damage and pollution of their nesting beaches.

All content from Kiddle encyclopedia articles (including the article images and facts) can be freely used under Attribution-ShareAlike license, unless stated otherwise. Cite this article:
Green turtle Facts for Kids. Kiddle Encyclopedia.