Bramble Cay, also called Maizab Kaur, Massaramcoer or Baramaki, and located at the northeastern edge of Australia and the Torres Strait Islands of Queensland and at the northern end of the Great Barrier Reef, is the northernmost point of land of Australia. It is 55 kilometres (34 mi) southeast of the mouth of the Fly River of Papua New Guinea. 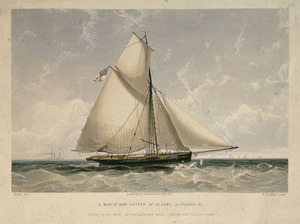 European surveyors from HMS Bramble encountered the island in the 1840s.

The island was formed around a "basalt outcrop produced by Pleistocene volcanic activity and is composed of foraminiferal sand, compacted guano and, at its south-eastern end, a low phosphatic rock platform."

The name, Bramble Cay, derives from European surveyors on HMS Bramble, who came upon the island in April 1845.

In 1862, a mining lease was granted to the Anglo-Australian Guano Company and occasionally boats would come to mine the low grade phosphatic rock but due to its low quality, a permanent base wasn't created.

After several shipwrecks, the first lighthouse, a 42 feet (13 m) pyramidal steel tower, was finally erected in 1924. It was demolished in 1954 and replaced by the present lighthouse, a 17 metres (56 ft) stainless steel tower, which was equipped with solar power on 6 January 1987. There are maintenance visits by vessels of the Australian Maritime Safety Authority every three to six months.

Bramble Cay is a breeding place for green turtles. The surrounding sea is rich with algae and algae-loving fish such as unicornfish, wrasse and trumpetfish. The island was also home to the Bramble Cay melomys, an isolated species of rodent that was the first mammal species to be declared extinct as a consequence of human-caused climate change.

About 5 kilometres (3.1 mi) to the southwest are the Black Rocks, also called Rebes, which rise one metre above the water. Three kilometres northeast, maps show submerged Nautilus Reef, the existence of which is doubtful.

Bramble Cay and the reefs and rocks close by are separated from other reefs and islets further south by Bligh Channel (Bligh Entrance). To the north and northwest, the Great North East Channel separates them from the coast of Papua New Guinea (Parama Island), which is 48 kilometres (30 mi) to the north.

Administratively, Bramble Cay is part of the Shire of Torres, specifically of the Eastern Islands Region. Although the island is located 25 kilometres (16 mi) north of the Seabed and Fisheries Jurisdiction Line between Australia and Papua New Guinea, the Australian sovereignty is undisputed and explicitly recognized by Papua New Guinea.

Customary tenure of Bramble Cay is held by the people of Darnley Island, the closest inhabited island, 45 kilometres (28 mi) south-southwest. Darnley Islanders travel to Bramble Cay to collect turtle and bird eggs during the nesting season, and also grant people of the neighboring Eastern Islands, Stephens Island and Murray Island, permission to collect.

All content from Kiddle encyclopedia articles (including the article images and facts) can be freely used under Attribution-ShareAlike license, unless stated otherwise. Cite this article:
Bramble Cay Facts for Kids. Kiddle Encyclopedia.