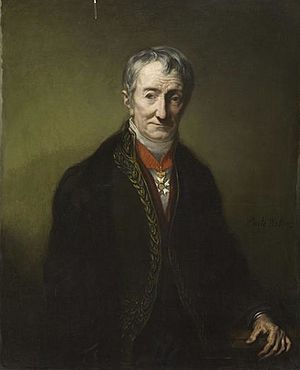 Alexandre Brongniart (5 February 1770 – 7 October 1847) was a French chemist, mineralogist, geologist, paleontologist and zoologist, who collaborated with Georges Cuvier on a study of the geology of the region around Paris. He was the first to classify Tertiary formations and was responsible for determining geology studies as a subject of science by collecting evidence and informations in the 19th century.

Brongniart was also the founder of the Musée national de Céramique-Sèvres (National Museum of Ceramics), having been director of the Sèvres Porcelain Factory from 1800 to 1847.

In 1797, he became an instructor of natural history at the Central School of the Four Nations, and became the professor of mineralogy in 1822 at the Museum of Natural History in Paris. He was appointed in 1800 by Napoleon's minister of the interior Lucien Bonaparte director of the revitalized porcelain manufactory at Sèvres, holding this role until death. The young man took to the position a combination of his training as a scientist— especially as a mining engineer relevant to the chemistry of ceramics— his managerial talents and financial acumen and his cultivated understanding of neoclassical esthetic. He remained in charge of Sèvres, through regime changes, for 47 years.

Brongniart introduced a new classification of reptiles and wrote several treatises on mineralogy and the ceramic arts. He also made an extensive study of trilobites and made pioneering contributions to stratigraphy by developing fossil markers for dating strata.

He was elected a member of the American Philosophical Society in 1819 and a foreign member of the Royal Swedish Academy of Sciences in 1823.

In his early ages, Brongniart focused on the studies of reptiles and published Essai dune classification naturally des reptiles in 1800, which he compared the anatomy of reptiles in order to classify them into different groups. The four classifications were Chelonia, Sauria, Ophidia and Batrachia. However, even-though he classified Batrachia as a sub-class of Reptilia, Brongniart noticed a huge difference in the anatomy of Batrachia compared to the rest of the class. This problem was resolved in 1804 by Pierre Latreille by replacing Batrachia into a class called Amphibians, and the rest of the Reptilia grouping was retained. Therefore, Batrachians is the only group that is no longer recognized as reptiles as they are amphibians. 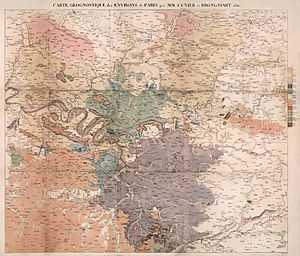 The most significant work for Brongniart was Essai sur la géographie minéralogique des environs de Paris in collaboration with Georges Cuvier on studies of geology around Paris in 1811. At the time, Cuvier was trying figure out the periods the fossils are from and to reconstruct the extinct mammals based on the periods they are from. Their paper "Essai sur la géographie minéralogique des environs de Paris" identified nine formations that had been formed over a very long period of time. The formations, starting with the oldest, were called the Chalk, Argile Plastique, Calcaire grossier, Calcaire silicieux, Formation gypseuse, Sabels et Gres marins, Gres sans coquilliers, Terrain d’eau douce, and Limon d’aterrissement. Brongniart found that some of the strata had marine mollusk fossils, and some had fresh water mollusk fossils. He used the alternation of these marine and fresh water layers to disproved the theory that strata was deposited by a shrinking ocean. The paper was first read to the public on April, 1808 but was extended in June, 1808 and later on 1811. They were the among the first people to study the earth by its fossil content instead of relying on the characteristics of rocks. During the collaboration, they also found evidences against Abraham Werner's Neptunism. The results triggered Cuvier into creating catastrophism.

Another significant contribution in stratigraphy was using the fossil content in the strata he examined in Paris to identify strata in other locations instead of depth or lithology, as rocks can't be expected to have the exact same characteristics or depth if deposited under different conditions.

In 1822, Brongniart published the first full-length study of trilobites in which he classified a variety from Europe and North America and tried to group them based on age. This work contributed to later work on Paleozoic stratigraphy.

His wife was Cecile Coquebert de Montbret (1782–1862), the daughter of the French consul to England, Charles-Etienne Coquebert de Montbret. They had three children together. Their son, Adolphe-Théodore Brongniart, became a major figure in the study of paleobotany. Their daughter Hermine (1803–1890) married Jean Baptiste Dumas, and their other daughter Mathilde (1808–1882) married Jean Victoir Audouin.

All content from Kiddle encyclopedia articles (including the article images and facts) can be freely used under Attribution-ShareAlike license, unless stated otherwise. Cite this article:
Alexandre Brongniart Facts for Kids. Kiddle Encyclopedia.