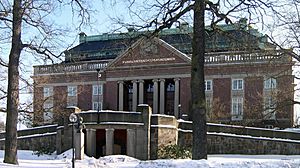 The Royal Swedish Academy of Sciences or Kungliga Vetenskapsakademin ("KVA") is one of the Royal Academies of Sweden. The Academy is an independent, scientific, non-governmental organization, set up to support the sciences, mainly the natural sciences and mathematics.

The academy was set up to find useful knowledge, and to write about it in Swedish. The academy was meant to be different from the Royal Society of Sciences in Uppsala, which had been started in 1719 and published in Latin. It was built near the main business centre in Stockholm, (which unlike Uppsala did not have a university at this time). The Swedish scientists wanted it to be like the Royal Society in London and Academie Royale des Sciences in Paris, France.

Groups of the Academy meet to give out international prizes: 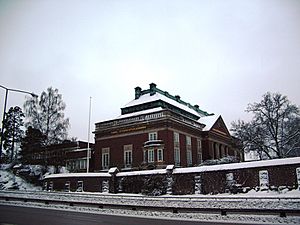 The Royal Swedish Academy of Sciences

All content from Kiddle encyclopedia articles (including the article images and facts) can be freely used under Attribution-ShareAlike license, unless stated otherwise. Cite this article:
Royal Swedish Academy of Sciences Facts for Kids. Kiddle Encyclopedia.