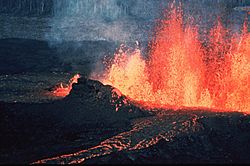 A volcano eruption is the release of stored energy from below the surface of Earth. The heat comes mostly from radioactive decay, and convection, in the Earth's core and mantle.

Earth science is an all-embracing term for the sciences related to the planet Earth. Earth science may also be called geoscience.

It is a broader term than geology because it includes aspects of planetary science, which is part of astronomy. The Earth sciences include the study of the atmosphere, oceans and biosphere, as well as the solid earth. Typically Earth scientists will use tools from physics, chemistry, biology, chronology and mathematics to understand the Earth, and how it evolved to its current state.

If there is one fact which underlies all Earth science it is this; the Earth is an ancient planet which has been changing the whole time since its formation. The extent of the changes is much greater than people used to think. 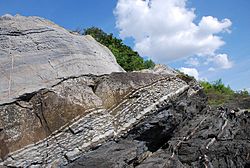 The Ordovician–Silurian boundary, an example of marine transgression as exposed on the Southern tip of the Hovedøya island, Norway. Due to the folding of the Caledonian mountain range, the layers have been inverted, leaving Ordovician granular limestone on top of the later Silurian brownish mudstone.

The following disciplines are generally recognised as being within the geosciences:

All content from Kiddle encyclopedia articles (including the article images and facts) can be freely used under Attribution-ShareAlike license, unless stated otherwise. Cite this article:
Earth science Facts for Kids. Kiddle Encyclopedia.