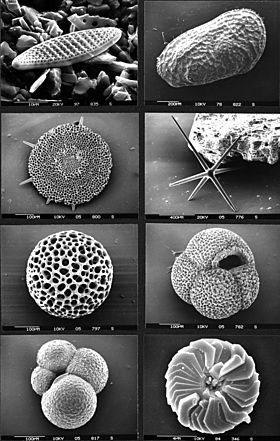 Micropaleontology (also sometimes spelled as micropalaeontology) is the branch of paleontology that studies microfossils. Microfossils are fossils generally not larger than four millimeters, and commonly smaller than one millimeter. A microscope is used to study them. Every kingdom of organisms is represented in the microfossil record. Microfossils can provide important information about the ecology in the past.

Microfossils are most common in sediment that forms beneath water, particularly ocean water or lake water. Very old microfossils may be found in rock. Special techniques are used to separate microfossils from rock. For example, the shells of diatoms and some other organisms are made of silica; other materials in the rock can sometimes be removed with acid, leaving just the silica shells.

The area of study for pollen and spores, including fossils, is called palynology. 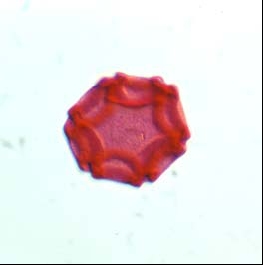 A light microscope image of a fossil pollen grain. Pollen grains are used to identify which plants lived in the area when the sediments were laid down.

All content from Kiddle encyclopedia articles (including the article images and facts) can be freely used under Attribution-ShareAlike license, unless stated otherwise. Cite this article:
Micropaleontology Facts for Kids. Kiddle Encyclopedia.