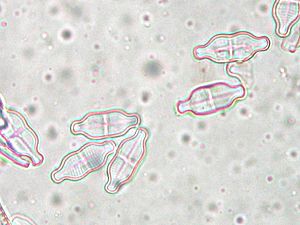 Different Diatom species have hard shells with many different shapes and patterns. The shells stay even after they die, and are useful in palynology.

Palynology is the study of very small natural particles. The word literally means the "study of dust". A palynologist is someone whose job is to identify what the particles are. Samples of particles can come from the air or water or soil or rocks. They could be organic and inorganic. Micropaleontology is a related area of study; it involves very small fossils.

A palynologist uses a microscope. They may also use chemical tests to find out what a particle is made of.

The main work of a palynologist is to identify each particle. Many different kinds of particles might be in the same sample. They may include: 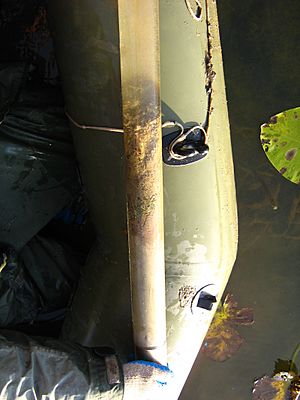 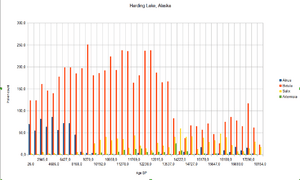 A graph shows how pollen at different levels in a sediment core has varied through time.

Palynology is used in forensic science to learn where something came from, by looking at the particles in or on it.

Palynology is also very important in the study of climate history. In bodies of water such as lakes, ponds, and the ocean, sediment builds up slowly, so that the oldest sediment is at the bottom. There are ways to take a sample of the sediment that doesn't disturb the layers (either using a tube, or by freezing).

In glacial lakes, the sediment may have varves, which are two layers per year that are different colours. If there are varves, a lot of detailed information can be discovered in a core sample.

All content from Kiddle encyclopedia articles (including the article images and facts) can be freely used under Attribution-ShareAlike license, unless stated otherwise. Cite this article:
Palynology Facts for Kids. Kiddle Encyclopedia.