Mature sporangium of a Absidia mould 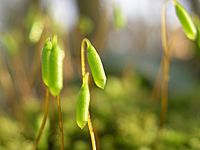 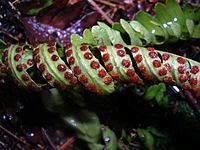 Sporangia (sori) on a fern leaf 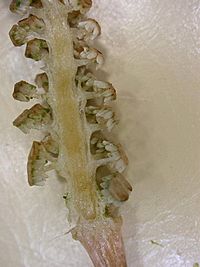 A sporangium (pl: sporangia) is an enclosure in which spores are formed. It can be a single cell or multicellular. All plants, fungi, and many other lineages form sporangia at some point in their life cycle. Sporangia can produce asexual spores by mitosis, but in nearly all land plants and many fungi, sporangia are the site of meiosis, and produce genetically unique haploid spores.

In flowering plants the sporangium tissue (except the epidermis) that produces the female spores is also called the nucellus.

All content from Kiddle encyclopedia articles (including the article images and facts) can be freely used under Attribution-ShareAlike license, unless stated otherwise. Cite this article:
Sporangium Facts for Kids. Kiddle Encyclopedia.